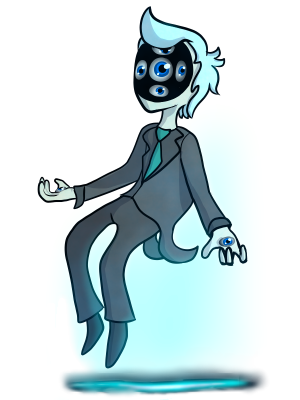 
Nexus as he has chosen to be called is an interdimentional entity that traverses realities via the Void.
The Void is a space devoid of material, it is nowhere while at the same time everywhere. The Void breaks the rules of how reality functions on all dimensions lower than 12. Therefore it can not be fully comprehended by beings in the 3rd dimension.
Nexus travels to different realities in order to learn all that he can. He is hard to impress and often treats other beings as being less than himself.
Other beings are a means to an end, especially if he can learn something new.
He has great reality breaking powers, but he is not a deity and nor claims to be one.
He is extremely paranoid of possible injuries to his eyes, so he will flee a scene if threatened, or if something is thrown at him.
He is unable to walk physically and relies on a form of telekinetic energy to make himself hover.
The more energy he uses the brighter a purple haze in his eyes will glow.
He is unable to use his hands to manipulate his surroundings do to the eyes in his palms. He uses the same telekinetic energy to move and pick things up.

His eyes seem oddly similar to evil-eye beads.
It's unknown if this is a coincidence.

(Took a few weeks to earn up enough to get this bean! Eeee! I hope the paintie passes <3 )