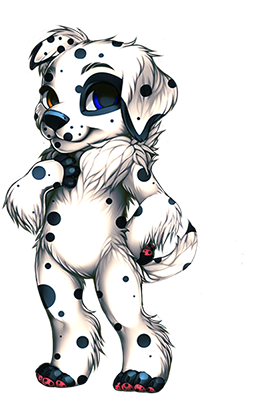 Cov is a wiggly dog of the spot variety. He likes to work with his paws, so he became a construction worker in the town of Olde Foxbury , providing it's citizens with containers for their plants, shelters for their pets, and homes for it's ever growing population. Cov enjoys seeing the fruit of his labors, building the community for the better and barking at pesky squirrels.

7/20/2016
Cov organized a small part of villagers to move to Dragonsmaw Manor in order to broaden his horizons and hopefully learn a thing or two. Everything is a little more sticky and spooky around here , but the denizens need homes and pots just as much! Better get to it!

8/20/2016
After listening to some of his fellow villagers, Cov rounded everyone up and led them to their next location, Tigereye Peak. It was quite chilly, and some of the villagers would need some time to acclimate, but Cov did have an extra layer of fluff to help insulate him. Cov observes the buildings of Tigereye Peak and it's surprising to him that the majority of them use ice and snow to fortify themselves. If Cov is to build more houses, he'll have to get used to that.