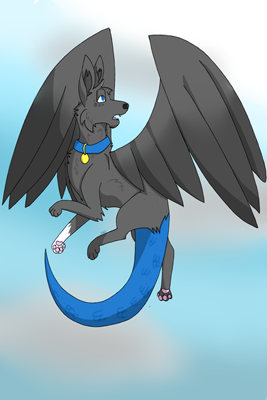 He stood in a cave, having followed the people there, they'd left before dawn, so he should be alright... " Hello? Hello? " He asks, entering, searching for something. someone. " Hello? " He continues, not ready to give up so early. " Hellooo? " He continues to call, searching still. " Hello, is anyone there? " he asks, a weak croak sounds nearby, he stops for a minute, then begins to search, asking after a few minutes. " Who was that? " He hears mumbling, he kneels by the opening of a nook and reaches a paw in. " Excuse me? " something grabs his paw, so he hauls them out, it's a corvid, slim and fragile.

that's how it began.

( adding CSS if I can, I'll even pay someone to write a sky CSS for me to use )