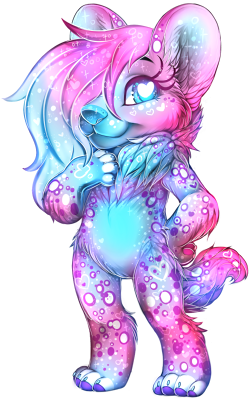 Mandy is a peppy and energetic pupper! She’s loud and boisterous, and just about the most confident wild dog you’ll ever meet. She’s somehow both nocturnal and diurnal, and often stays awake for days on end without any negative repercussions. Mandy has a constant craving for sweets, mostly for chocolate and cotton candy over something more fruity, but she would never pass down an offer for a sweet that is sour. Mandy often works with Galaxy Critter when setting up town parties, having been to quite a few when she was younger, but her ideas are often a bit extreme. She often gets grumpy about having her favorite ideas shut-down, so she sometimes hosts parties that aren’t sponsored, advertised, or allowed even known by town hall. One can expect blaring music, plenty of strobe lights, a wizard, a piranha pool (to keep Rain away), and truckload of candy alongside other perks when going to one of her legendary parties.

Mandy, always the fan of rock n’ roll, founded and led a band back in her years of highschool. She was very passionate about the music she made, and her group became quite popular. She would probably still be in the music industry if the band hadn’t disbanded, and solo electric guitar players had a fighting chance in the industry.

Random things:
LOVES hugs. A very affectionate doggo.
Likes to hype things up a lot
Will somehow teleport to you at the mention of the word “party”
Bisexual queen
Can say “XD” aloud without saying “ecks-dee”
Had an emo phase in middle school that she doesn’t like to talk about
Very brightly colored, so much so that it looks like she glows
Reads webcomics often, her favorite being Sparklecare
Loves rock music and horror movies, and HATES rap and country music with a burning passion
Also dislikes romance movies, but fantasizes about her “special someone” sometimes
If she were a Pokémon, she would be a Houndoom with colors brighter than fire