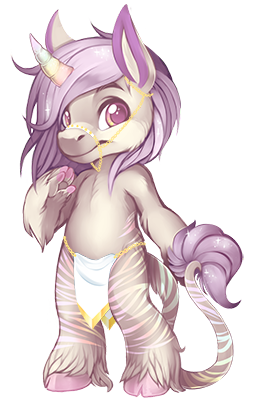 Species: Unicorn
Career: Herbalist
Height: 5ft 6in
Weight: 145lbs
Bio:
Prisme was born on a ranch near the heart of French Alps, to a small herd of 12 unicorns kept for showing and breeding purposes. Prisme was the 3rd colt born that season, and like his mother, had a striped prismatic coat. Most of his childhood was spent as a feral, unaware of his abilities he'd learn from his parents later on. A lot of his time was spent grazing and galloping across large open pastures with other young unicorns, being watched by tourists and having his picture taken. Very rarely did he get close enough to the fence to be touched, but once and awhile he'd stick his nose or horn through to sniff at a tourist's bag for a biscuit or get patted by a curious child.

As he got older and came into his magic, he learned how to speak, how to change his shape to walk on two legs, and even change how he looked to people who were skeptical that unicorns existed. Many times he played tricks on tourists, appearing as just a white horse in a herd of other white horses, something the entire herd had a laugh about every night before supper. More often than not, they were scolded for tricking the tourists, but it was all in good fun.

As Prisme blossomed into adulthood, the ranch owner decided to move him to a different herd, so he didn't clash with the current lead stallion for dominance. Prisme's world opened up, having lived on the same pasture and in the same barn for his entire life. His new pasture was much wider, so wide that the fence wasn't visible to the named eye. There was a pond and a creek, as well as a section of trees for cover. The grass was taller in some sections as well, this was a whole other world. The herd he'd been put with was much larger as well, but not nearly as impressive in color or size, but they accepted them as their new lead stallion easily enough. He settled into his new herd fairly quickly, and within months was able to lead them around their massive enclosure with ease. Life was peaceful and happy.

This didn't last long. As time passed, occasionally a unicorn from Prisme's herd would go missing, no one would know where they'd gone and searches for them through the pasture would turn up blank. The older mares in that herd became nervous, every month like clockwork, another mare would go missing. Prisme was worried for his herd, it was shrinking and these disappearances were happening more frequently. Determined to find out what was causing so many of his mares to go missing, he forced the herd to sleep in the middle of the pasture instead of the barn for a night around the time a new mare would go missing.
Lights in the dark around the empty barn caught his attention that night, watching closely as several lights moved in and out of the barn before shining towards the pasture and his herd, then they left. Ordering his herd to stay put, he went to investigate what might've been left behind... There was nothing but human tracks and scents left around the barn, were the humans removing mares from this herd and taking them somewhere else? What if the same was happening to his old herd? Worried for his mother and friends in his old herd, he escaped the tall fence keeping his herd in, an impressive leap for a stallion his age, racing across the farm to his old herd's pasture. when he got there, he found that is was empty, their barn was empty, they were gone, all of them. Had they been moved? Taken? He'd never know. Fearing for his own herd, he hurried back to them, relieved to find they were still all together in the center of their pasture. But he was still incredibly worried that his family from the old herd were missing to.

The following day there was a lot of noise near the front of the farm, the sound of large trucks and trailers, incredibly noisy. Unfamiliar humans were all over the place, taking down fencing and moving trucks. Prisme kept his herd as far away from the noise as possible, listening while his herd grazed. A truck was moved to the side of their pasture and the fence was opened up, men with dogs coming through to their side, whistling and shouting. The mares spooked and started running, Primse keeping himself between them and the dogs, kicking out at any that got too close. But he realized too late what they were doing, they were herding them. The mares all piled into the trailer they'd been forced into, but Prisme refused to budge, rearing and kicking anytime anyone tried to get close to him. It took several ropes around his neck and legs to pull him into the trailer with the others, the doors closing despite his protests.

Exhausted and shaken, Prisme didn't know where they were going or what was going to happen to them. He only knew that he was going to protect them if anyone tried to harm them...