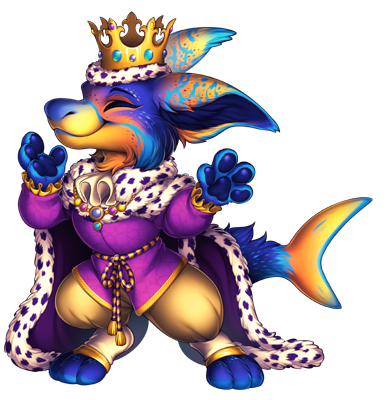 Prince Cinq is the former prince of a kingdom long lost. Though he's no longer the prince, he still demands to be addressed as such. He's very arrogant and likes to put on a tough act in order to "keep his authority". Though the act is simply an act as he is really soft and struggles mentally and has been even discovered sobbing in his room when nothing bad seems to have happened to him. He's never told anyone anything about his past other than "he was a prince of an ancient kingdom." He supposedly is hundreds of years old now but no one knows why he's lived for so long. Only a select few know that he's been alive longer than he should be.
____________
Cinq walked through the halls of the palace shaking. He was in BIG trouble now. Neuf had talked Cinq into playing with the spiked balls in the throne room. While doing that, Cinq had broken the glass case Mother used to protect her crown. Cinq turned the corner and walked into his mother's room.
"Cinq. I can't believe you would be dumb enough to play with the spiked balls in the throne room! Why would you do that?!" His mother shouted at him. Cinq flinched back.
"I... Neuf..."
"Don't blame this on your brother!" His mother snapped. She growled, looking down at Cinq in disgust. "Go to your room. I can't stand to see you."
Cinq opened his mouth to say something then turned and bolted out of the room. Tears swam in his eyes. His family hated him. He never did anything to make them hate him. Everything used to be fine before his father died. But when his father died, his mother began to treat Cinq with disgust. Neuf became the "favorite" of the family. Cinq had no friends. Everyone laughed at him. All Cinq was to other was "the small pathetic prince." Cinq paused as the ground began to shake.
Earthquake? Cinq ran even faster. Be had to get out of the palace. He ran, the ground shaking more and more. Cracks formed on the walls. Shelves fell from the walls, books and other items fell. Crinq threw his arms over his head and ran. He made it out of the palace. He kept running until he was out of breath. He whirled around and watched as the palace began to fall. Towers crumbling. He saw Neuf run out of the palace. His mother was staggering behind him, her bad leg holding her back. Suddenly the palace fell, landing on Cinq's mother. Neuf had made it far enough away to not be crushed by the falling palace. Cinq ran forward and dug through the rubble.
"Mother!" Cinq cried, tears forming in his eyes. Neuf suddenly appeared behind him and shoved Cinq to the side. Neuf moved a few large rocks then stopped.
"She's.... Gone..." Neuf said quietly, tears streaming down his face. Cinq shook his head stepping back, horror all over his face.
"No...." Cinq opened his mouth to say more but he couldn't think of anything else to say.
__________
Neuf had become he new king. Neuf sat back and simply watched as everyone bowed before him. He ordered food from the fields. People were beginning to starve as Neuf and Cinq sat in the palace eating like pigs. Well Neuf ate like a pig. Cinq hardly ate at all. Neuf was destroying the kingdom. Cinq had heard word on the street of a revolution starting. In hopes to prevent it or at least hold it back for a while, Cinq went out daily and handed out food to the poor. It wasn't working. Cinq frowned as he sat on his bed. He was so tired of Neuf. Of royalty. He'd shut everyone out at this point.
____________
Cinq was pressed up against the wall, a spear pressed against his throat.
"Please... Stop... I'll.. I'll to anything don't kill me please..." Cinq said, his voice barely more than a whisper. The spear was lowered.
"Hm... No death isn't enough for you.... Follow.." the person with a spear was a female wolf with pricing amber eyes. Cinq followed her out of the palace. She stopped him to watch his brother be dragged from the palace, a rope around his throat. He watched at the other end of the rope was tied to a tree branch. Hatred burned in Neuf's eyes as he saw Cinq. Cinq didn't say anything as the chair was pulled out from underneath his brother. The wolf prodded his back with the spear.
"Keep walking." Cinq kept walking. Walking out of town and into the forest. They stopped at a small hutch. The wolf opened the door and beckoned Cinq to enter.
"You will stop aging here. You'll live forever. You won't be able to die yourself. Someone else will have to kill you." The wolf grinned. "That should be out punishment enough." The wolf handed Cinq a potion. "Now drink."
Cinq paused then drank the potion. He could feel his heart speed up. He collapsed. He wouldn't die here.... He couldn't.... He could feel that. Then all was darkness.