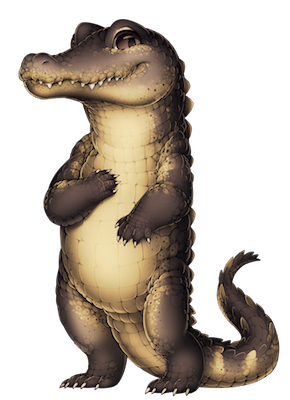 Gator is infected with Lycanthropy. Changes into a beastly monster after exposure to moonlight or especially frustrating board games. Howling at the moon relieves the symptoms for a little while, but use a Golden Apple for best results.

Gator is not the kind of guy to sugarcoat things. He'll slap it into your face...Literally.
He loves hunting down game, especially in swamps..
He is reckless, but.. At least he knows what he is doing..Hopefully. He loves the outdoors and anything filled with action. So he became a warrior. While he isn't the most caring kind of guy, at least he's willing to help you.. Somewhat-