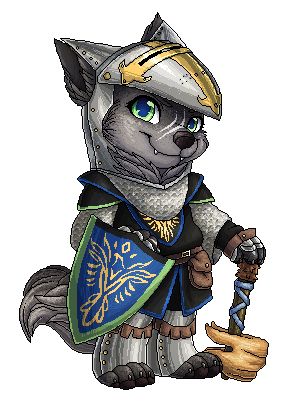 Sister in Arms of Lazarus and Smogden. The three each come from uniquely varied backgrounds, but all fight for a common goal: the safety and protection of the icy home they hold dear.

Nix is a warrior wolf born of knight's blood from Olde Foxbury, but was ultimately cast out into the frigid wilds of Tigereye, having lost most of the battles she fought, Lazarus found her while out on patrol and brought her home to their ragtag village of adoptees.

Nix had been taught long ago to fear and slay dragons, but has since seen that their true power lies in their ferocious love for their friends. Having since been properly trained and equipped, she now fights alongside her dragon brothers with a heart of fire that rivals even theirs.