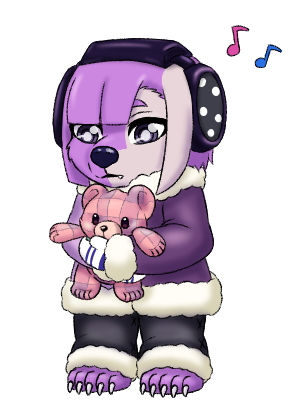 Ursula is Eli's oldest cub but the last one she adopted

She's almost completely nonverbally autistic, the only very rare occurrences being when alone with her mother and only being two things, "Maman" and "Je t'aime" (Mom and I love you respectively)
Eli doesn't mind in the least her not speaking, because she herself knows how hard it is to communicate with others, being much better at it writing or using pictures than verbal communication
Even if she never takes off her headphones which are constantly playing music and she looks like she's ignoring you, she isn't, she's just not going to answer with words
Her headphones are special and she can choose whether she can hear the sounds around her or not, no matter the volume of the music
She picked up from her mother different sighs and huffs and is starting to use them instead of being totally unresponsive like she used to be

Sometimes she comes up to her mother and either sticks really close or just flops on her, silently asking for attention. If Eli isn't doing anything that can't be interrupted, she's always happy to oblige and cuddle for a while with her.
On rare occasions she even takes off her headphones during these moments to "directly" hear her

Hunfrid and Shun's and the triplets' older sister