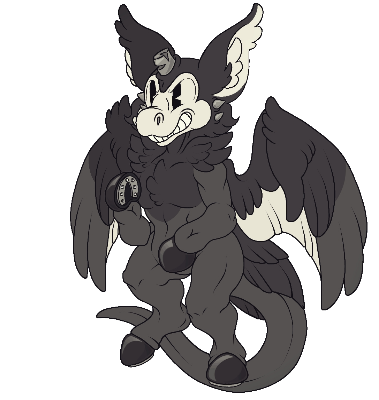 This is Butcher, once known by the name of "Prim".

He was originally called something like "Butch" (as in an old dog name) but it had telephoned into Butch-er. Despite the name, Butcher does nothing that his name may suggest, though he can be a bit of a bully.

Butcher was not originally from Olde Foxbury, or from anywhere in the known land. It is believed he had appeared here on his own, albeit unintentionally.

It seems that Butcher, while able to eat usual foodstuffs, will "feed off" negative emotions. If that means anything, it's that he will be out looking for trouble. Often times he can be found sleeping in front of people's front doors, tearing up Herbalists' crops or kicking at people who try to approach.

While there are many Dutch Angel Dragons around, this particular one is way too mean to be an "angel"... what happened with this one?