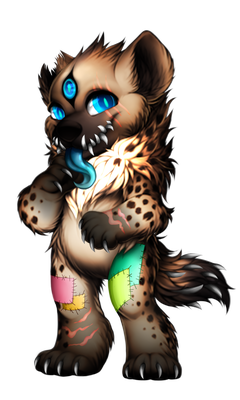 Note: Trash does not regard himself as any gender, and is fine with any pronouns, favoring "He/Him" over the rest. However, feel free to call him any pronoun you please.

Trash was not always called Trash; in fact, his original name was Kamal, a name that meant "beauty, perfection, excellence." Kamal used to take pride in his name, often regarding himself as a Prince of the Savannah.

However, one night, it was the end of Kamal. Poachers came to the Savannah as the Hyena was out and about. Kamal never did see it coming, a bullet straight to the back of his head. He was dead. A poacher looks at his floor, observing his spotted rug with a smirk. Another, glances at his wall, spying the head of the Hyena previously known as Kamal.

Kamal's spirit, was never at rest after he was dead; and he was no longer Kamal. A warm, friendly, somewhat self centered spirit, turned corrupted, seeking revenge, despite knowing that he would never find the poachers who killed him. He decided to take revenge out on others, anyone who would so much as look as him wrong.

What was once known as Kamal, changed it to Trash, a word he heard humans who knew English say, regarding things that are considered less than worthless. He adapted the name to reflect upon what those hunters had treated him as; Trash.

Along his Journey's, he came across a hand-made doll of a Hyena, lost on a Safari by a little girl. It ended up being bewitched by the sun god, Ra. He had decided to rest inside of it, due to the plushy nature of the doll. His soul became attached to it, thanks to the spell Ra had put onto it, He had to enter it during the day, or risk having his spirit evaporate. During the night, his spirit would manifest itself physically, and would be free to roam across the land.

There were few ways to undo the spell; destroying the doll was one way. The other was bringing the doll back to the girl who owned it originally. The third and final way, was to converse with Ra, and convince him to remove the spell.