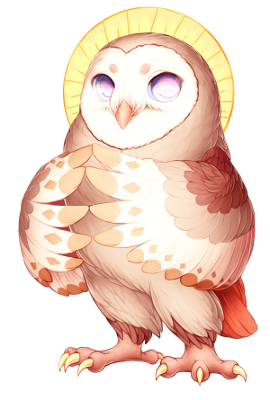 Laq the Law is infected with Zombipathy. Eating brains relieves symptoms for a time, but comes with memories of the brain's former life. Your doctor recommends adding hot sauce for extra flavor, but a Golden Apple a day will send the Zombipathy away.

It is not hard to guess that Laq the Law is not her real name. But she is more than happy to go by this nickname - though it is not always said with kindness. Similarly, it is not known what village the blind owl originally hails from. Her friends do not poster her about these things, though, having decided that they know all about her that they have to - that she is incredibly just and a trustworthy friend that will support you through thick and thin. (Even if she will scold you in motherly fashion all the way through.) That she adores dawn and sunset, to glide through low sitting clouds of Quetzal Palace. That she loves Xeil deeply and truly.

It is quite the story how they ended up together, actually. The two owls met soon after Laq moved to Quetzal and joined law enforcers - as one of city's defenders, Xeil happened to cross Laq's path time and time again, helping her solve various cases. As time passed, they grew close, Laq confiding in the knight more than anyone, his optimistic, kind nature cheering her up even when she felt falling apart. And even though she realized she had fallen deeply in love with kind male, she was afraid to confront him about her feelings, afraid to lose this precious friendship.

The turn in their relationship came when Xeil was accused of a murder. Though some believed her quest for truth be biased, Laq set out to prove Xeil's innocence and punish the guilty with fearsome determination. Her hard work paid off and the culprit was found, Xeil restored in his position and their mutual (!) feelings revealed.

As Laq is blind, feeling her way through the world with keen magical abilities that add to her investigation skills, she can afford to live in daylight with no discomfort. Though more than anything, she likes to sit by Xeil and listen how he describes the night sky and world around them.

It was not too long ago when Laq met Clemensa and others through working on a case about bunch of food thefts around one of the main streets - her investigation led her to Clemensa and the two cats that had just recently settled down in wickerbeast's home. Though it was a bit of challenge, Clemensa and Gyda convinced the owl to give the two another chance, after they promised to compensate all the loss caused to merchants.

Though Nayrem and Nilofer still dislike the law enforcing owl, the rest of mismatched gang that has gathered around the pet shopkeeper accepted Laq and her life partner readily.