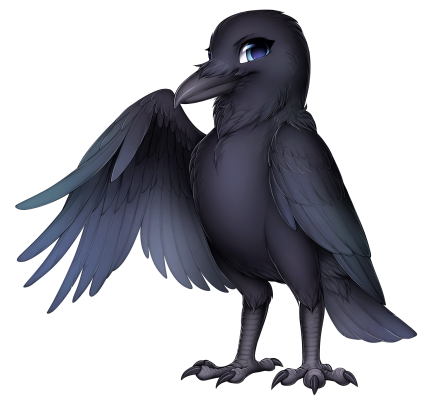 "What do you offer here, outsider? My tribe and I may be songbirds, but I assure you, our talons are sharp, our wits keen, and our spirits burn with passion. We will listen to you, but do not try to extend your welcome here. We have much to accomplish, without the need of nosy intruders or travelers poking their heads in."

"The lesson the beasts who took our freedom, history, and heritage from us has been long overdue. And I intend to be the force which will bring about vengeance for my tribe and their kin."

---
Vitu is the proud, singular leader of her tribe of red-winged blackbirds. She has made herself leader through her insight, but more notably, through her power and passion for battle, a notion not commonly found among her kind. In her youth, she ventured across her lands, speaking to many other creatures, and learning what they had to offer, from their books, their tales, their songs and legends. And what she found out there was invaluable--even if it changed her outlook forever, and brought about a breach between her and her only son.

Convinced of wrongs done to her people in the past, she's begun to rally her tribe, among others, to do war and bring what she believes is the long-overdue justice to anything that will stand in her way--even if it would be others of her own kind. And, secret from all that who her, she has a deadly trick that will reduce her opponents and their homes to ashes--so that their lives, like her people's past kin, will be forgotten and erased. So that they will know the evil they have done, and learn the harsh reality of what comes from trying to erase another species' past and legacy.

Single-minded and steadfast in her cause, there are some that would call her merciless and pitiless--to a dangerously malicious degree. However, those that follow her, and those that meet her are often swayed by her determination. To many, her ability to be strong, even in the face of mortal predators--to rise above the station of being a mere songbird, and challenge even those that would prey upon their kind--has worked to get many on her side.