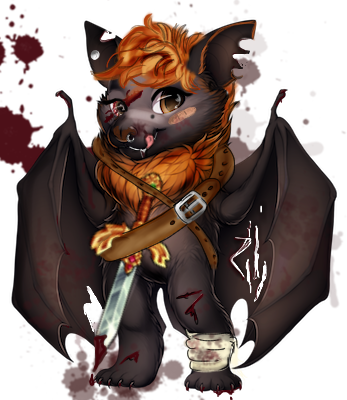 Avarice is infected with Lycanthropy. Changes into a beastly monster after exposure to moonlight or especially frustrating board games. Howling at the moon relieves the symptoms for a little while, but use a Golden Apple for best results.

It isn't fear so much as surprise that ambushes you when you see this bat lounging on a nearby cloud. She looks like she has seen better days, and you worry that she is in need of medical attention, she waves you off.
"Nah, but I'd love a drink if you can spare one" she says, winking. Whoever she is, she's certainly full of bravado.

Meet Avarice, a determined young bat.
Avarice was born in dragonsmaw manor, her father was a greedy trading merchant and loved to make money- which is why Avarice got her name. However, she didn't want to be a trader, so she moved to Quetzal palace and begun training as a warrior. She tries not to think about her past, as her parents brought her up to be conniving, tricky and mean.

Ava is relatively new at her career, but this doesn't bother her; according to her she will soon be up there on the "best warriors" leaderboard. She may appear lazy, but takes her job very seriously and will always protect anyone in need.

When she isn't fighting monsters, Avarice enjoys reading, music and taking cloud naps.
She likes females of any species but has a soft spot for hyenas.