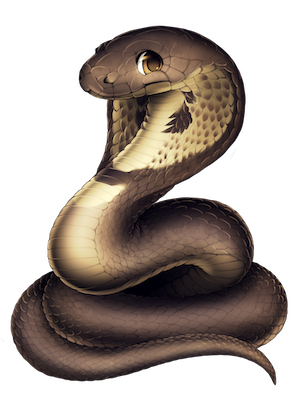 
Viper was born to a very, very large family on the fringe of a rugged mountain range that was more of a cliff-ridden plateau smack dab in the middle of a vast desert. When he came of age he left his home to strike out to learn the poisoner's arts, eventually becoming an expert of nearly all types of poisons and their respective antidotes, most of these poison philters were concocted from his own venom. In addition to his poisoner's craft Viper spent several decades learning the healer's art as death often is hand in hand with life.

It was during his ventures in the wilds he became a part of an assassin's guild and met his beloved Kit. At first the two fought almost constantly, but, as always, time warmed the pair to each other.
It was some time later, Kit - and the guild - learned that Viper wasn't no ordinary Mamba. He was nearly immortal, with only one known weakness that he keeps jealously guarded.