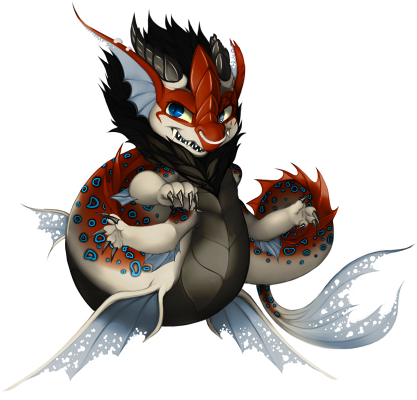 Vane may seem threatening at first glance, but he's more bark and less bite. Though, he won't hesitate to bite if you let him. After migrating to Dragonsmaw, his low immunity to the diseases of his new home quickly led to him being afflicted with Blood Obsession. He'd try to sate his obsession any way possible, including monsters. He could usually take them down, but after a run in with the Tormented left him with his left arm lost and left eye badly damaged, he's since developed a fear of them.
Lynn has tried multiple times to cure Van'e blood obsession to no success, though the medicine does curb the symptoms quite a bit, so Vane tries to take the potion regularly.

Vane used to be a a kind, jovial, and outspoken individual, but his new obsession mostly overrides his previous personality. He's still outspoken and jovial, but also manipulative. He's always seeing how he can get blood from someone and uses his seemingly bright personality to do so. Though, his act is pretty easy to see through and he's not a very good liar, so once someone has turned him down he usually, reluctantly, lets it go... for a while. The only one he does not pester with his condition is Lynn as he feels indebted to him for saving his life.

- Loves sewing and making clothing and accessories
- Hates for anyone to get his materials dirty
- Will try to use that as an excuse to get blood form them as repayment
- Has phantom pains in his arm sometimes, especially if he sees a monster
- Sometimes he'll go into a panic attack as well