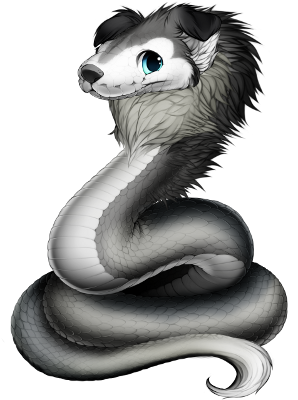 Buddy no longer has a house! They will be unable to work. Please replace the house or move Buddy into a FC slot.

Buddy was created when Charlie had been up too late making potions and accidentally spilled a wolf and snake morphing potion on the ground, little did he know a dead pet was buried underneath, so Buddy slithered out, scaring Charlie. But now they're chill.

Buddy loves going on long slithers through his garden and Kifo will bring them bones to gnaw while they watch their plants grow. Occasionally when growing lengthier crops they'll go down to Robor's workshop, help him paint, then watch the paint dry. As you can see, they are very easy to entertain. Buddy really enjoys spending time with friends and fellow villagers. Buddy really enjoy it when Banana takes them on camping trips out in the forest between Foxbury and Dragonsmaw.