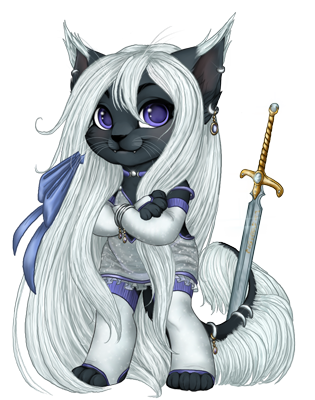 'Life is a song - sometimes it's fast paced and makes you want to dance, other times it's slow and sorrowful, screaming and angry or even heartfelt and loving. But no matter your song it's wasted if you don't stop and listen to it sometimes.'
~ Mi'ri'lil

Build: Very petite elven with a frail seeming frame, yet rather enduring due to many years of exuberant dancing.


Personality: Usually very sweet-demeanored, she's typically a friendly, nice and somewhat playful person. Rather flighty she can have her chaotic moods and a hidden spiteful streak that sometimes comes to the forefront. This chaoticness often makes her very impulsive and she will rarely plan ahead and tends to rush into situations without much forethought. Mi'ri'lil's emotions run stronger then your typical person, feeling joy and sorrow so intensely that her chest often hurts.

Mi'ri'lil's meddlesome and doesn't really seem to know the meaning of the word 'privacy', either from magically snooping into other's affairs, or having a habit of giving 'too much information' about herself. When she thinks that somebody is keeping a secret from her she'll go to extreme measures to find out what's happening.

Knowing how evil drow can be Mi'ri'lil tries extra hard to show her good side, being kind and often taking onslaughts of insults and hatred to rebuke them with kindness and understanding.

Deep underneath all of this Mi'ri'lil is rather melancholy and damaged. Her life has been a marathon of highs and lows with the most horrid pain causing and emotionally scaring experiences oddly balanced with some of the most wondrous and lifting encounters. It's an aspect of her that she tries hard to keep others from seeing, often trying to let out her more troubled emotions through song (and sometimes pure angst-ridden screaming) in private where others can't hear her.

She's devoted to the goddess Elistraee to the point of being an obsessive zealot.

Her Sword: Mi'ri'lil wields a rare and powerful Moonblade. It was originally owned by the cleric of Eilistraee who helped her escape the Underdark to live in the Promenade temple of Eilistraee beneath the city of Waterdeep. The priestess had perished during the sojourn and the blade chose Mi'ri'lil as it's next bearer. (Moonblades are typically passed down through an elven (not dark elven) family line, are very good and will only choose a good wielder. Sometimes it will choose a new owner who is not from the family line, in this case the sword tends to choose Eilitraeean drow.)
With each new owner the sword gains a new power, making some of these blades very powerful and potent.

It's a +3 bastard sword with the qualities of shock, holy, disruption, dancing, minor image (2x), heal (1x), good luck (as the stone), suggestion (1x), charm person (1x), fly (at will), influence (diplomacy +6) and it sings (hums) when wielded (giving a benefit like a bard's inspire courage effect.) If an evil creature tries to use the sword they have to make a difficult will save or die.

Merits: A very skilled performer with a voice like heaven and the graceful step of an expert dancer. She's incredibly kind-hearted and save for little, playful spiteful moments she can be very forgiving.

Flaws: She's impulsive and often doesn't plan for anything having a bad habit of rushing into situations without any forethought. (ie. Everything from reckless such as rushing to attack a dragon without casting spells to protect against it's breath weapon, to emotionally impulsive such as having to cast divination spells to know the father of her first child. )