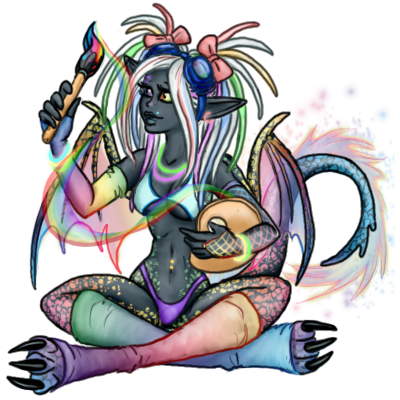 
'I'm flying my colours, which are beautiful.'
~ Zena'Luae

Personality: Zena is bright, curious and creative. She finds a fascination in people's personalities, lives, history, and well.. pretty much anything in the whole spectrum of what makes somebody. It's the little details that she tends to see, like if somebody trimmed their hair, or is wearing new shoes, a personality trait that stems from her curious prismatic dragon side... this also tends to make her a wonderful friend since she' s a good listener and is honestly interested in what you have to say about your life.

Art and music are this half dragon's passion. She considers herself a painter, but often has more of an abstract 'splatter' style then illustrative arts (although she is talented in many painting aspects as well). Nearly any type of music catches Zena's attention, but ever since learning of other more 'modern' planes she's grown a love for dance and trance music quickly taking to the raver sub-culture and style.

At times Zena'luae may seem somewhat distracted, which is due to her many forms of colour syntheisa. Her prismatic dragon blood gave her the ability to sense colours on so many levels that at times it can be overwhelming. Sounds generate colours to her vision, as does texts, tastes, scents, and even touch. She loves that her colour senses are so strong, and often pities those who cannot experience the world to her strong degree... although such a near constant sensory overload is distracting sometimes.

Merits: Friendly and innately magical. Very talented with colourful spells.
Flaws: Easily distracted due to her own strong senses. Can be rather flighty.

Favourite Food: Anything with rainbow colours, it tastes extra special to her. (She tends to love multi-coloured candy, like rainbow lollipops and Skittles.)

Things you don't know about me:
"I have incredibly strong synthesisia and see colours with the written word and when I hear music. Certain colours also cause certain tastes. It's so strong in me that it can be very distracting, but I've learned to paint the music I hear, and can actually make paintings that cause certain tastes for me when I see them."


Notes:
Small motes of colourful light randomly spark from her body, and the natural glow from her wings can't be extinguished.

She's part of Phae'shalee's 'clique', and has been either a playmate or friend of every Moondancer sister in varying life stages due to her own slow aging.