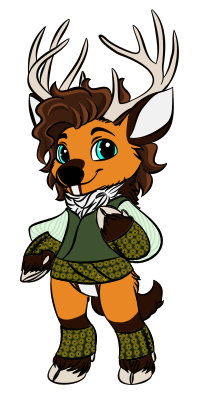 Personality
Friendly//Cheerful//Agile//Energetic
Species: Whitetail Deer
Age: 24
SO: Gay (Polyamorous)
Build: Average height but very slim and leggy.
Appearance: Handsome, and with an unusual buckskin coloration that would look more natural on a horse than a deer. He doesn't fuss over clothing too much, keeping it simple and neutral.
Careers: Explorer, Server
Life Mates

Riley •♡• Jasper
History
Danny found his way to our community along with his partner Riley, and together they opened 'The Moonflower', the local pub and general hot-spot for the other villagers. While his panda tends the bar and cooks up scrumptious food for voracious customers, Danny does all the serving and mingling. Literally bounding around the floor this stag is like lightning in a bottle when he gets going, appearing to be everywhere and do everything at once. His hyperactivity also extends to his exploring duties, roaming far and finding as much as he can. When Jasper rolled into town and started putting down some roots, he and Riley both fell hard and the trio was formed shortly thereafter.