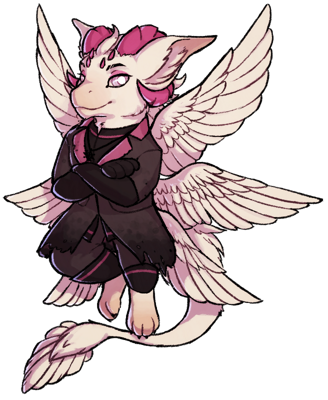 Paz is infected with Vampirism. Symptoms include craving blood, sensitivity to sunlight, an allergy to garlic, and changing into a bat after especially forceful sneezes. If they start to sparkle, immediately consume a Golden Apple to cure the infection.

Character design and paintie by me

Paz Goodman, sometimes known as Catastro, is an angelic mage with an insatiable appetite for knowledge. Their specialties involve the studies of experimental magic, science, and other planes of existence. However, this curiosity has gotten them into more than their fair share of trouble, winding up with them imbued with the essence of Chaos itself.

Paz is a sassy, self-righteous, self-focused, yet extremely loyal individual. They are willing to do whatever it takes to protect themself and the few people they love.

They took on "supervillain" alias of "Catastro" in order to get the supplies to rescue their partner from a nightmarish realm with the help of a celestial mercenary. Nowadays, though, their alias is simply used for branding a small business in selling strange gadgets. 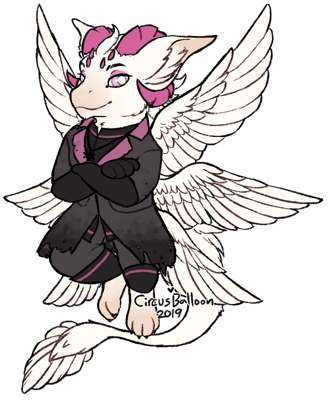 Salles Engod
Paz's sweet and anxious boyfriend. Paz isn't exactly sure how someone so sweet and anxious ended up so loyal to them of all people, but they love Salles dearly and appreciate all he's done for them. Salles also helped get the supplies to rescue Paz's partner, which Paz is eternally grateful for.

Lossi Normal
Paz's good friend and Salles's sweetheart. Lossi is utterly absurd, obnoxious, fascinating, and extremely impressive to Paz--and she helped Paz get the supplies to rescue their partner.

"Rosette"
Paz's friend who formerly was employed via a pricey magical pact to help rescue Paz's partner. Rosette is very patient and chill and, given her extreme power and otherworldliness, is the epitome of Paz's interests. They are utterly enamored with her.

Monny Wheeler
A very helpful friend, and also part-time employer. Paz works odd jobs at the circus for a chance to study deities and make a buck while doing so, but Monny is also enjoyable company.

Elcycinu
Friendly acquaintance who works at the circus Paz sometimes works at. Elcycinu's an edgy, obnoxious minor goddess who exists between multiple worlds at the same time and that makes him entirely fascinating to Paz.

Then Aetura
Something of a friend or friendly acquaintance. Then's status as one of the Gods of Time makes him highly intimidating, but his dweeby demeanor is ... less so. Then is extremely fascinating!

Hernando Salazar
Lossi's grandpa is a retired pirate vampire and that's absolutely wild to Paz. Nando's also the boyfriend of one of Paz's friends.

Riujat
A strange and powerful witch whose magical services have been invaluable to Paz.

Ayo "Monarch" Parks
...It's complicated. They're on opposite sides of the law, but now that Paz is retired from super business... Ayo's not bad. It's just complicated.