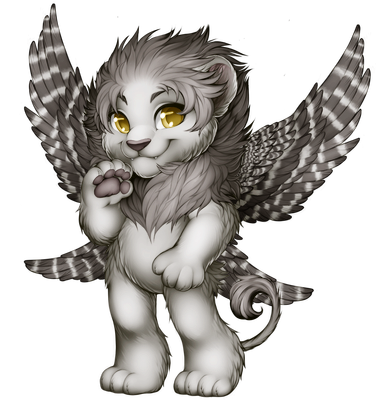 Azha is, most simply put, a great friend and a terrible enemy. As an angel of the mighty Seraph kind, all of their holy magic is concentrated into power--the legends of the ferocity and terror the Heavens could rain down upon the mortal world, smiting those who have strayed into unholy and demonic worshipping--these legends speak of Seraphs. Not that you could tell at a glance, though, as Azha, towering as they may be, with their great greyscale angelic wings, and carefully combed, (yet still bushy) mane, powerful paws to wield a hulking claymore (dare I say rivaling FF standards?!)--they are, thankfully, as most angels are. Friendly! Good buds! Cares about you! Makes sure you're taking care of yourself! Will protect any innocent with their life! And, on Piet's word of honor, the best cuddle buddy. That mane and their giant, foofy wings combined brings a guaranteed good sleep, so long as it isn't mid-summer. And you can bet you'll be safe, for what need of sleep do angels have?!
-We don't know the answer to that, because both Jaquerel and Azha have been very coy about it.
Though, having the normal angelic qualities, Azha can be very serious, even somber at times, but always polite. They're rarely flustered, and no one can recall the last time they've ever seen Azha get angry, or even surprised. Lately though, Azha has been much more withdrawn and reflective, and while they give the reason to be that they're contemplating the reality of "good" and "evil", and how angels can be "good" even if they still kill others, sure for the "greater good", and yes, the argument goes on and on--but something else seems to be weighing on their mind. The same kind of melancholy is seen from Piet, too, though only Azha has become less responsive to everyone else, leading to a variety of mixed feelings across the board.

Azha and Piet are very close friends, and have known one another for a long time. They came here together really, as just another adventure to embark upon! There's a wistfulness in their voice though, and on rare occasion the names "Felix", "Rayne", and "Silt" are heard, but they don't seem to want to talk about it, and nobody has pressed them. Other than that, they are pretty much friends with everyone else (even Azel restrains himself around Azha, showing a strange bond of trust) though Bao takes obvious interest in them. Nobody knows why, but... Bao just sometimes acts extremely protective of them, trying to speak in their place, though Azha isn't aware of this yet. Azha, when not checking up on others or defending the land, is off by themself at some peaceful spot, gazing thoughtfully out, lost in their own thoughts. Sometimes Piet or Bao or both are with them, and they silently enjoy one another's company, waiting on the outskirts of town, ready to greet any newcomers.

As previously mentioned, if they have to fight, Azha's main weapon is a claymore of considerable size--certainly no mortal could wield it as they do, with only one hand at times! They also gain a magical suit of armor, which also coats the outside of their wings in a thin layer of protective metal--this also turns their wings into a kind if battering weapon as well. They are slow and heavy, but a formidable opponent, and still have great reserves of holy magic at their disposal. Though, they are very weak at healing, and can only slow the effects of a wound, and feel, to some degree, the pain of the other, to give them some peace and, ultimately, try to get their body to not go into shock.

Azha is naturally a warrior to defend all!

<Paintie by Nudibranch <3!>
((This is all from an original universe that I've created, known as Prian. If you have any questions about it, feel free to ask! Also, I'm usually pretty open to rp, and all this about Prian is simply used as reference to show that there is something I'm pulling from. You don't have to know anything about it if you want to rp with me, I'll accommodate for anything ^v^ it's all for fun!))