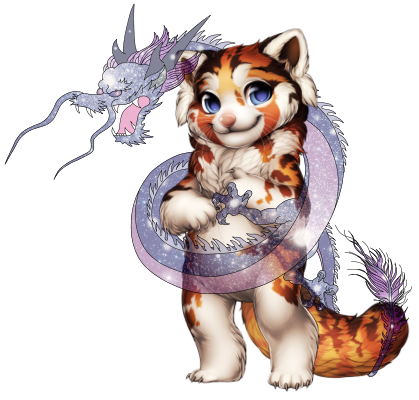 Bao is someone who often pokes into others' business, but keeps himself aloof. He simply likes to know what's going on at all times, though he only gets involved if it will affect someone he cares about. When he talks, it's strictly about business, and won't easily indulge others in small talk--everything that he does has to be useful in some way. He's a very good stalker, and is quick to make long-lasting impressions; he either likes you or he doesn't. And his opinion is unlikely to ever change.

He only really knew Azha as he came to the village, but he knew a great deal about everyone else, through rumors he's heard of the others. He's not friendly, but he never does anything to make anyone dislike him really, so others generally respect him. That, and his standing as an Astral Shifter of at least a century old, complete with having experiences outside of this world, makes others a bit in awe of him. His normal form is that if a red panda, and when he shifts to his starbound form, it's that of an eastern dragon, hailing from the Dawn, as compared to that of a phoenix, which hails the blazing Sunset.

He cares very little for fighting, but if he does, it's in his fearsome astral state.

Nobody knows why Bao hunts other critters. He doesn't seem to care about taming them, and willingly passes them off to Azel... maybe they're plotting something together. We just don't know.