Warrior Career Guide
By: E
Warrior is classified as a Basic career, because it doesn't depend heavily on raw materials from other careers to operate. It requires Weapons and Armor from the town shop or Blacksmiths. It provides Loot Reagents to Crafters, Tailors and Blacksmiths; Wood to Construction Workers; and increases productivity by protecting the village. 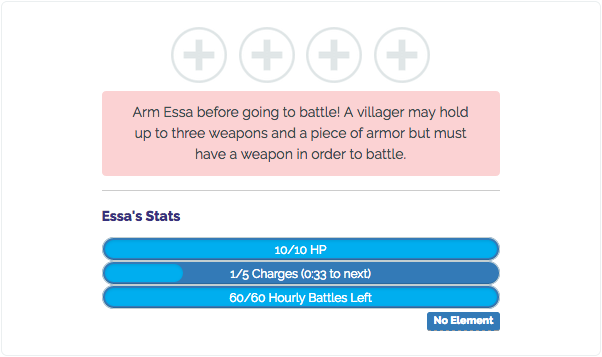 Your villager starts with 1 Battle Charge and 10 HP. You use a Battle Charge to begin a battle. Each villager can hold a maximum of 5 Battle Charges at any time. They are added every 5 minutes at :05, :10, :15, and so forth.

Your villager has a base DMG of 5 unless it is wearing one of five costumes giving +5 DMG or using a Helmet. Unlike the weapons, the helmets actually boost the villager's base DMG, thereby affecting the damage dealt by any weapon used.

Royal Costume | Warrior Costume
Before you can charge into battle, your villager needs at least 1 weapon. However, you may not win many battles with no armor for the HP boost and no choice of Element for the weapon.

There are 4 Elements for Weapons and Armor: Balance, Dark, Light and Astral.

equipment is Balance. Max Durability of 50 for crafted equipment.

Head into your village's weapons shop

or User Stalls to pick up Armor and Weapons. Common Shields and Weapons available for 75 FC

in their respective shops all have 15 Durability. Crafted equipment's durability depends on the Blacksmith's skill level, and your usage of Item Durability Potions. The potions can increase max durability beyond its crafted limit.

Your villager may not be able to equip all crafted equipment at first as most of them have Wins Required to use.

Beta testers were given the opportunity to select a Voyager's Reward Package that included a Sword of Discourse or a Shield of Discourse. These two items have the special Astral element that is strong against the other 3 elements. They have 250 Durability.

Pick out a combination of weapons and armor that your villager can use, equip them, and begin! Or...not? 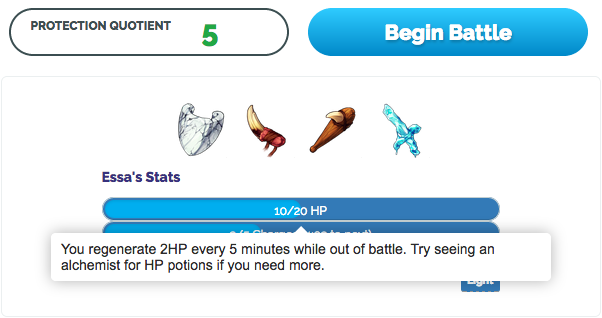 The armor your villager is wearing increases their HP limit, but you still either need to wait for them to heal at a rate of 2HP every 5 minutes or use HP Potions to heal them up. If you Begin Battle right away, you'd be charging in with the same amount of HP as you'd have with no armor.

HP Potions can be used from the Inventory or right on the Warrior page (including in a battle window). The potions you have show up under the Stats on the main Warrior page or after the Weapons in the battle window. 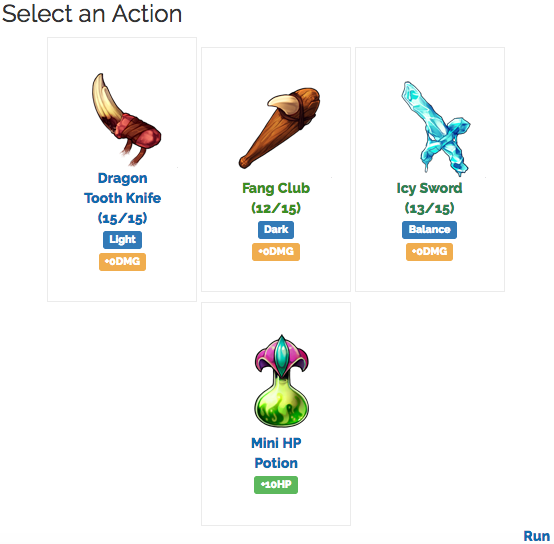 Regardless of how you decide to heal your villager, you may finally begin the battle. Monsters follow the 4 different rarities on site: Common, Uncommon, Rare, and Super Rare. They are named after their rarity, so it should be pretty obvious. The higher its rarity, the more HP it has and the more DMG it deals. 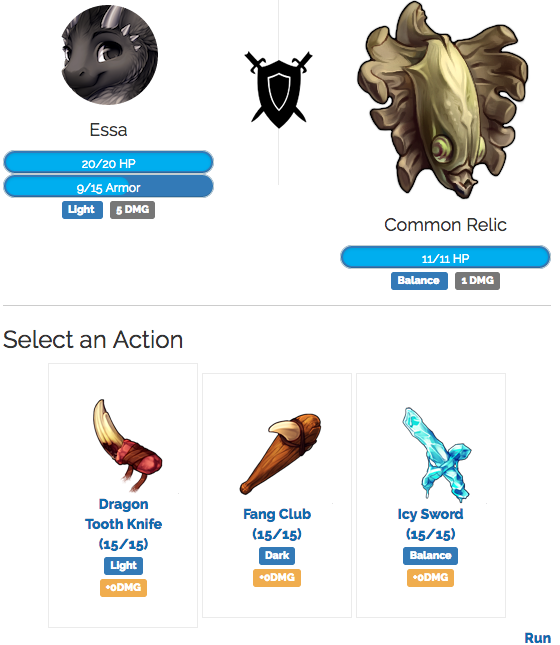 If you win the battle, you'll always get some FC. You might not get any Loot. The amount of

FC and type of Loot depends on the Rarity of the monster and your luck. The handy Next Battle button allows you to proceed without returning to the main Warrior page. 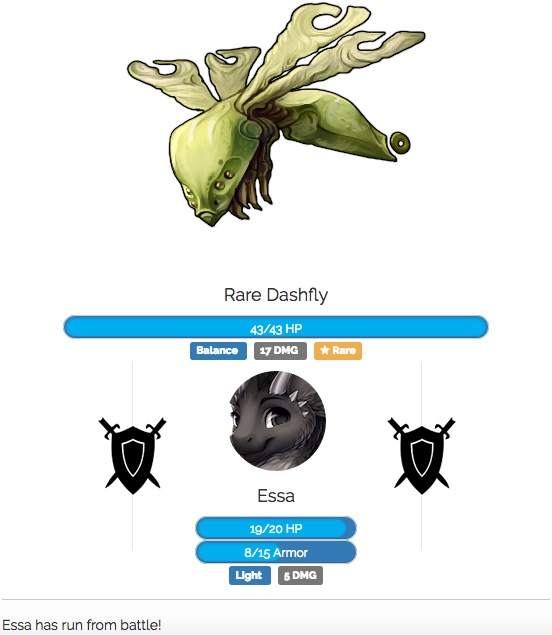 It's okay to Run from battles that your villager cannot handle. There is nothing to be lost from fleeing the battle, except for the Battle Charge and the Wins Statistic. On the other hand, if your villager loses all of its health, well, you know what to do.

During battles, you occasionally run into Captchas. You have to answer the question before you can attack. They involve counting the number of animals, plants, potions, or books.

You are allowed to switch equipment at any time, including during a battle. Click outside of the Battle window to reload the main page. Hover over your equipment and click on the weapon or armor you want to replace. 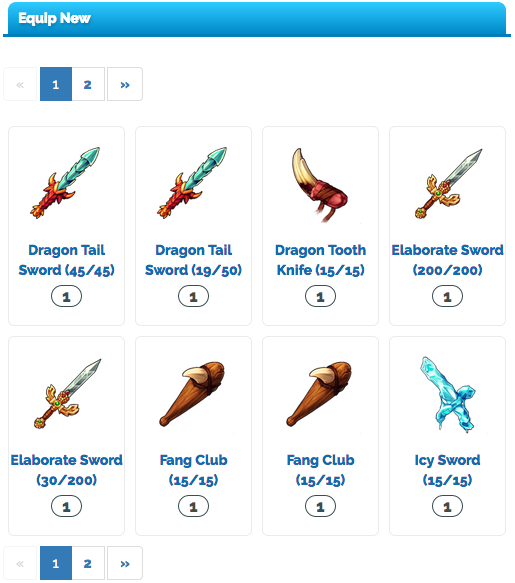 It's a good idea to have a spare piece of armor handy, because your villager loses all of its extra HP if its armor breaks and the cap goes back down to 10. If you replace the armor before it breaks, your villager retains the HP (up to its new cap if you pick armor with a lower +HP).

Keep in mind that items break and disappear upon reaching 0 durability. Be prepared to buy/craft a replacement, or remove it before this happens and repair it with a Blacksmith. Repair times are improved by villager skill level. However, the improved time is not displayed when you initially select an item, so don't worry if the times look the same between a 0 Skill and a 200 Skill villager.

Once you've built up Wins on a villager, the Warrior carrier is simple to manage and to use to acquire the Loot you need to craft Weapons, Helmets and Costumes. Monsters can only drop Loot that is their rarity level or lower (e.g no Sky Coins will be falling from Common Gliders, but they will from Super Rare Flying Serpents).

As with any Career, your villager has a chance of falling ill with each completed action. Damage is halved for a Warrior with a minor illness. Villagers with a major illness cannot work at all.

Loot and Steel can be used by Blacksmiths.

Wood can be used by Construction Workers.

Loot and Steel can be used by Crafters.

Loot can be used by Tailors.

* * *
During Tigereye Peak's Snow Festival spanning Dec 14-29 2016, Warriors from all villages had the chance to find snow fairies while battling.

Fairies were obtained from the Explorer and Warrior careers. The chance of finding them began with a 20% drop rate, decreasing by 1% with every fairy found to a 1% drop rate. This reset at the beginning of the next day.