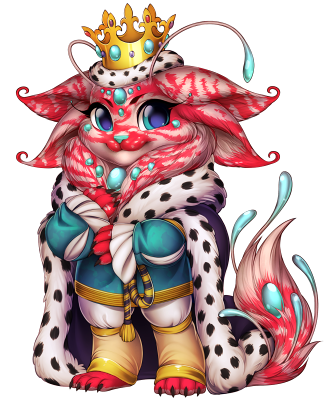 Injured by a monster, Faolan was rescued by Urasina and taken into her care to recover. Now he hopes to repay her by gathering materials she can use or sell.

Faolan is not shy of his Gembound heritage, though it can get the better of him (quite often). His explorations often take longer than his friends planned, due to his boundless curiosity. While he acts rather meek around Urasina, he's obsessed with Ploofballs and will play with Steppe's harvest for hours, much to the zebra's dismay. He also enjoys startling Buck, particularly when the Saggitari is trying to tame a wild animal, though that is a lot harder to do with Kodama around. Interestingly, Faolan will never prank Tatonka; instead, he tries to cheer up the black stallion with jokes and harmless tricks. He does the same for Moofy, who greatly enjoys the Gembound's games. The Unicorn Tybalt is easily entertained as well However, Faolan's tricks and jokes don't get any reaction from Yukumo, leading him to dislike her a bit. Plume actually pulled a better prank than Faolan once, so he now sees her as his friendly rival in the matter of pranks and tricks.