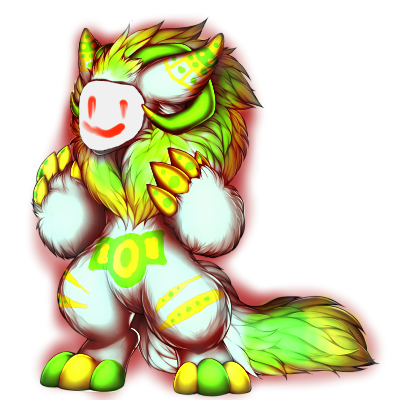 Tags: mask smile you can trust him blood sacrifices profit

Mister Smiles has fallen ill with Blood Obsession. Time taken to collect or domesticate animals is doubled. This illness can be cured with Plasma Drink.

There is no reason to be afraid of Mister smiles. Yes, those red smears look suspicious. Yes, it appears as if he does not have a face under that mask. Yes, there are rumors that it is simply void behind the mask. Yes, he does have an odd, unexplainable red glow. Yes, some of the animals under his care seem dazed, almost entranced.

But there is
no reason
to fear
mister smiles

(Note- it has recently been discovered that the red glow is because Mister Smiles has made a deal with Havergal- 5% of his profits for 5% of the power Havergal gets from blood sacrifices. Since Havergal gets tons of power from these sacrifices, and is completely broke, while Mister Smiles makes tons of money and has no blood sacrificial related powers, this deal is surprisingly beneficial for both)

(yes, he has blood obsession. I won't cure him because it's just too perfect)