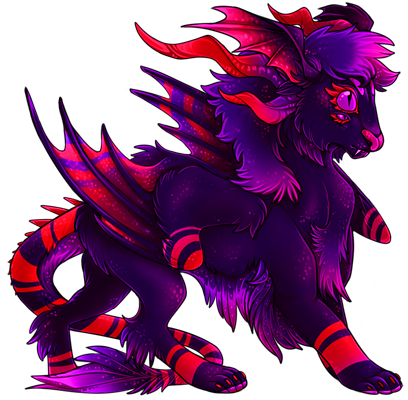 Relationship Status: Single and Open
Tricky lives in a dark cave at the edge of Silverflecked village, closely monitored by Rain. When Tricky had first arrived at the village, another child of ambiguous backstory and unknown circumstance in Rain's eyes, the reaper dragon did not hesitate to take Tricky in. Rain took Tricky to the village's main cave where all their silver was mined-the cave that had given the village it's name-and led her to a closed-off entrance that led to a smaller cavern. Rain explained to Tricky that it had been closed off because it was filled with an abundance of precious gems and jewels, but there was a long drop one would have to take to get to that part of the cavern, which had led many greedy thieves to their doom. Rain asked if Tricky would be the guardian of that section of the cave, and in return would get to live their and receive full protection by the dragon, and the Neolite instantly agreed.

Tricky is a bit more different than other Neolites than the average Elo, per say. During her creation, there had been a slight error with the tools and substances used to make her, thus leading to a few minor differences in appearance and biology than previously seen with the Elo subspecies. The most obvious of these, based on outward appearance, is the unique shape of her ears and the pointed pupils in her eyes.

Tricky has enhanced hearing and eyesight, able to see in pitch black and hear even the smallest noises. She is also capable of echolocation by emitting a high-pitched yip or squeak from her throat. Do to this, and the fact that she fears being hunted by poachers, Tricky prefers to stay in her cave, where she can easily defend herself or flee if need be.

However, though Tricky has better hearing and eyesight than other Elo, and it is probable she will not lose these gifts upon entering her older years, she has lost a lot of the supernatural powers her subspecies is known for. She cannot tell what others are thinking or tell if they are lying, and as she might never lose her eyesight like all other Elo then her powers will not strengthen. All that remains of the great insight Elo are supposed to have is a gut feeling, or the ability to tell if something is off. Tricky may not be able to read minds or detect lies just by using her powers, but what she does have of her powers helps her to read situations and know when something isn't right. When thrown into one of these circumstances, Tricky will either try to figure out what's going on or do her best to get herself-and any of her friends that might be with her-out of there.

"Elo are the more mystical types of Neolites. It's always difficult to tell what they are thinking. They most likely are reading your thoughts, however. They have a supernatural sense that gives them great insight to everything in their life. This being said, they also have very good eyesight in all four eyes for the younger years of their life. Upon growing older, all Elo go completely blind, thus only strengthening their supernatural power. Make sure your Elo stays in a dark and cool place, as they enjoy the shade. And don't lie to them--NEVER lie to them."