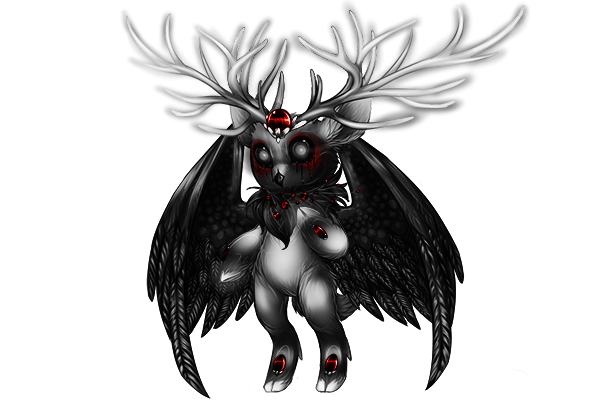 The Dusk Okei is said to be the the representation of the setting sun. The symbolic nature of the deer..is one of life, comfort, grace and spring. The Snowy Owl symbolizing death, wisdom, night and winter.

Dusk Okei as their name implies are usually spotted just before evening. This mystical beast is a reminder that everything will change with the sway of time.

Dusk Oekies are often misrepresented as bad luck, an Okei is capable of incredible screeches and screams eerily similar to that a of human.
They are prone to replicating noises heard in the forest and often use these sounds as warnings, intimidation tactics or to get a reaction from those around.

This has lead many humans to be drawn to the sounds of a curious Okei replicating the voice of children or whispering pleas of help in the forest.

Dusk Okeies are notorious for their incredibly strange behavior patterns. Many have been known to twist their long necks 360 degrees to look back at either their prey or curious humans. Usually upon seeing a human they have a habitat of staring unblinkingly.

Those who witness an Okei's glance may feel a distinct discomfort or fear, their uncanny blackened eyes and incredibly still bodies are often hard to interpret. Documentation of Okeies in their wild habit are extremely difficult to capture as they've been known to exhibit this odd behavior for hours at a time if they think there is a predator nearby.

A black mucus often leaks from their eyes, which confuses and bewilders most who see the Okei, assuming it is crying or bleeding from it's sockets.

This is however false, it's not entirely known why this mucus is succeeded from their eyes but it's assumed that due to their defensive mechanism of rarely blinking that the mucus serves as both a protective coating and a moisturizer.


Male Okeies are incapable of direct flight due to their often overgrown antlers and larger mass. They are still often seen as being incredibly flexible and some are capable of short bursts of gliding although most male Okeies reside in dense forests and rarely if ever show this skill, except perhaps before diving into water.

Female Okeies on the other hand are fully capable of flight. Their wingspans are usually larger and generally females are lighter on their feet. A female Okei also rarely has any forms of antlers, though hybrids with very tiny antlers have been spotted. Their ears are slightly bigger and more similar to that of a rabbit then a deer.

Although Male Okeies are incapable of flight, they are known to be quite majestic and beautiful. The males grow feathers specifically made for looking larger and more healthy. Many males fight for the attention of females in the spring and winter. Puffing their bodies up, bobbing their heads and expanding their huge feathers outward to look much larger.

Unfortunately Okeies are both mostly solitary and have very low birthrates. The chances of an infant okei surviving in the wild is incredibly slim as their natural habitats are dwindling quicker then the Okeies can adapt to. Since Okeies are often shy to the presence of humanity or development most end up starving in the last specks of wilderness.

In the subject of starvation all attempts to contain,breed or befriend an okei has been unsuccessful. It's been observed that okeies are herbivores but also have an incredibly specific diet of small rodents and varies greens. Most attempts at replicating their diets have been unsuccessful and the first okei in captivity passed away after a week without eating.

Regardless of how horrifying they may seem, okeies are rarely found to attack humans. However it's not advised to approach an okei, although they aren't prone to aggression approaching a wild male in their territory can cause injury or even death.

They have incredibly powerful peaks, long sharp antlers and a high intellect and have been known to observe an enemy with the intent o deceiving it later.

There are many different sub-races of Okei, Dusk Okeies are almost always vibrant hues of orange, browns and yellows.

But there have been many other Okeies reported, most of which are quite rare.

Strangely there is a rumor of Okeies being capable of walking on water, which quite frankly is ridiculous. We have yet to observe a behavior even resembling that of a creature capable of such a thing. However we have heard accounts of a phantom Okei that often vanishes and reappears. But those are just superstitions much like the rest of the legend surrounding these beasts. Okei's are now an OPEN species based mostly on their lore, I can't claim ownership of owl deer creatures or anything! All the art on this page with exception of the headshot was created by me including the paintie.