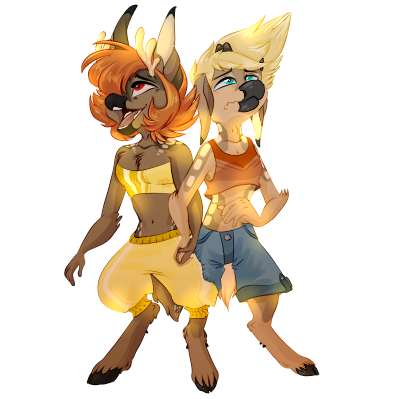 To find out about their origin read here;
http://krystalmath.deviantart.com/journal/Prim-And-Proper-617626740

Prim and proper were born in Russia. They were told that they were very special from a young age, their parents were both unknown to them. Their father was long gone when they were born, and their mother was too poor to take care of them and was forced to leave them at an adoption facility. They were very young when they ran away, at the facility they were very mistreated in malnourished as were all the other children. They ended up joining a Russian circus in which they had seem to find their true place. They were the freak show and the strongman act. As they age traveling across the world they slowly lost their accents and ended up having a very neutral voice in terms of origin. When they turned 12 they ran away from the circus after an accident with another performer. They spent the next two year or is running cross the country trying to find sanctuary in a place where they would not be judged. Over Time they made many friends and enemies. But no matter what they would always stick together, they had no choice. Overtime prim became a performer at a local bar in the suburbs. To avoid speculation Primwood often wear a large dress in which proper would curl up inside of. Overtime they eventually came out as a pair, they were judged at first but overtime there colleagues neighbors began to except them. They were relieved to finally found a sanctuary where they could grow up be themselves and live out their lives they began working at a café when they were 19 and they became quite advantage in showing off their abilities in terms of strength, something about their mutation allow them to lift incredible amounts of weight, bowlegged it join them was very special,. In fact it was neither a left nor right leg it was more of a mixture of the two almost as if it was divided in half. Either Twin could take control of the leg any given time. They eventually moved on to get into a performing in which they were dancers. And improper being attached found a very hard time finding romance, many other things were made awkward for them such as using a toilet or having a sleepover very standard things were difficult in fact at one point they were proposed an operation that would separate them but they refused it they get stuck together this long they couldn't bear the thought of leaving each other. Pam is a very giddy and fragile young lady, she is emotional and excepting of others despite their differences. Prim is very open to suggestions and takes other people's words is much higher than her own, she has a low self-esteem and the only thing that rises it is showing others how much she cares for them. Proper is on the other half very reserved and tactful in his ways he is very much determined to stay out of drama in crisis he is off in the thinking head on their shoulders. He is very protective over his sister but is also incredibly reserved in his ways he is much more of a pessimist then anything else intends to visualize the worst case scenario in every possible outcome of any possible situation. He is very nervous however he has a rather big ego when it comes to his strengths, he is very involved in literary works and plans to write his own novels. They have a strong sense of sibling rivalry however love each other very much. They getting a lot of spots as anyone who was stuck together would. Prim is messy and he is quite the night owl however proper is very cold and is easily embarrassed by his sister. Proper enjoys sewing and loves to read romance novels. He prefers to set his time by day and values acceptance more than anything in the world. Prim has she stuck her head that Sugar gliders her attempting to take over the world via cuteness. She does not trust sugar gliders......
Art and Characters (C) KrystalMath on DA and Furvilla