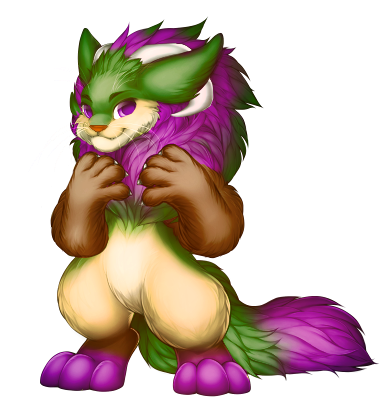 Growing up, Clemensa's favorite tale was that of an ugly duckling who grew up to realize he had never been ugly at all, merely in the wrong place. After all, she too was the odd one out among the young Wickerbeasts at the Manor.

The small-horned beast never felt as lonely as the poor bird of the fable, however. Having found a dear friend inTea, the two spent most of the time together. Their shared interest in plants and animals sent them wandering the wild for many hours, childishly researching fauna and flora of their town's wilderness. Unfortunately, it is hardly a safe place for two younglings and one of their adventures would have ended very badly, had not the young, but fierce Sake, Absinthe and Vodka come to their rescue.

This event sparked an unusual friendship, since the boistorous bunch had a growing love for animals, too. Clemensa could forget sadness about mocking whispers and sharp looks, few of the younglings felt like standing up to the Liqour Beasts and their new friends and the adults could be ignored.

As the years went, the childish hobbies turned into genuine desire to garden and tame animals. However, simple adventures in nearby woods were not enough for Clemensa anymore - she wished to see more and find the place that, perhaps, her odd looks originated from. She tried to convince Tea come with her, but the gentle female had found her place among the Liqour Beasts and did not wish to leave. Clemensa did not hold it against her and swore to come visit often - the two exchanged owlies that would always carry their letters to one another. After bidding a pained good bye to Tea and other Liquour Beasts, Clemensa finally set off on her journey.

Clemensa has never regretted the decision, while some looked at her with suspicion, others welcomed her warmly. Her first stop had been Oceandome, where she fell in love with the odd looking plants, while the strange animals did not give in so easily to the furry beast. One of her favorite villages ended up to be Tiger Eye Peak, where she felt right at home with her thick fur. It was where she met Froth and made quick friends with the cat. But eventually, her urge to see more of the world called Clemensa away from the winter wonderland.

Eventually, cat-faced female came to Quetzal Palace. It had been last in her list, as the ethereal land seemed a little scary because of the height it was located. But now that Clemensa was here, it was love at first sight. Among the countless colorful and odd citizens, she blended in perfectly and the soft colors pleased her eyes. Renting a house on one of the rosy streets, Clemensa began tending to gardens and setting up a shop where the offspring of her many dear animal friends could find their new owners. What sets her shop aside from others, she does not take money for the animals and instead trades for them - and only if the little pet likes the possible new owner.

After encountering two young, thieving cats that had recently arrived in Quetzal, Clemensa decided to offer them a honest job - exploring the wilderness to bring back seeds for her to grow, as she did not have time for it anymore. The pair considered the offer for a good while and then finally accepted, moving in with her until they could afford their own place. Nayrem soon moved onto new jobs, finding that battling beasts was much more to his heart, as was repairing the weapons so the edge of his sword was always sharp.

One by one, in various ways, more people have joined their small community and circle of friends since then. In a sense, Clemensa is the center of it and one they all look to for advice or decisions, should the need arise. The pale wickerbeast never thinks of herself as the leader, however, and loves all of her friends, new and old.