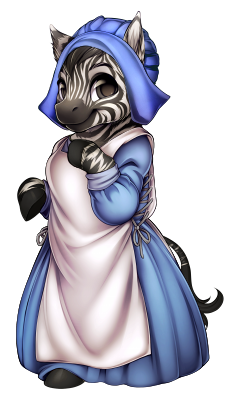 A gentle zebra mare with a love of all things green and leafy. Steppe came to Olde Foxbury to learn all about the native plants around the village, and to try her hooves at growing some of them.

Steppe looks up to Urasina, and while the zebra has no stomach for fighting, she appreciates everything the green-and-white horse does for the village, and tries to make daily life easier for her. She isn't so fond of Faolan, especially after the Gembound broke several of her plant pots while playing with some freshly-harvested Ploofballs. Steppe is very optimistic, and she thinks that one day she'll be able to cure Buck of his blindness, though the Saggitari does not share that optimism. This project is on indefinite hold now that Kodama has joined the band, though the tree spirit is quite helpful when the zebra is growing plants. Steppe has a big heart, and has taken it upon herself to be a mother figure to Tatonka, something the black stallion appreciates but doesn't openly admit to. She does the same for Moofy, teaching her about the plants and animals of Olde Foxbury, and she, Moofy, and Plume are a tightly-knit trio. And she mothers Tybalt too, who is quite fond of her. Steppe is the member of the band who is closest to Yukumo, and often the only one the warrior cat will talk to, though the zebra hasn't been told why.