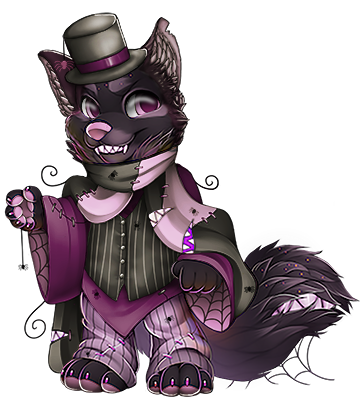 To simply refer to Pontus as a "tailor" would be sorely misleading, as his methods are anything but ordinary. Instead of utilizing the tried and true techniques associated with needle and thread, Pontus has cultivated magical spiders whose web act as thread for his masterpieces. The seams are practically invisible, and the clothing remains in-tact, even with constant wear and tear.

In a land full of beasts and ordinary folks who conclude they can kill those beasts, his clothing is particularly popular. Though, the magical properties that many of his outfits possess which give its wearer increased strength or agility may also be a contributing factor. Regardless, it is the young gentleman's great pleasure to provide work for his city's noble warriors.....especially how generously most of them are willing to pay.

Those who aren't willing to pay or worse, try to steal from Pontus, have the unfortunate pleasure of meeting Inanis, the gentleman's beastly guardian. And you know, the beast is always hungry, its favorite food, just like that of the spider's that keep it living, is that of raw meat. Pontus could make his beast stop, but he simply has no sympathy for thieves.