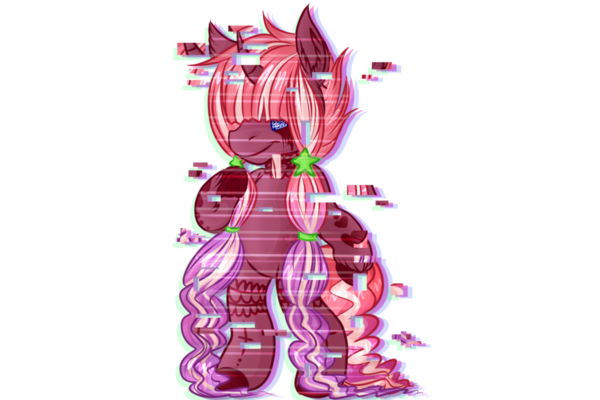 Glitch Hop no longer has a house! They will be unable to work. Please replace the house or move Glitch Hop into a FC slot. Art by myself • Paintie by myself

Theme Song :: The Pretty Reckless - Heaven Knows
Voice Claim :: Michaela Dietz
_____________________________________________________________
She was made in a futuristic world as a holographic helper but, as she learned more from the creators, she gained more sentience than just computer program she pretty much was. She didn't like how her creators were running things (Very corrupt, careless, etc) so she forced herself to disobey her command software, thus causing her to become a "glitch". Glitch Hop is mostly seen across computer screens or other electronic devices, then only for a moment before disappearing. However, she's managed to project herself from screens to appear as, well, a glitchier version of herself and can only remain in the real world for a few short hours before having to return. She hates being a glitch but would much rather be what she is now, despite causing electronics to constantly malfunction where she appears, than back with her creators.

Glitch Hop also frequently talks to herself. It's no strange thing for her to physically yell and scream obscenities at herself. Truth is, she's not yelling at *herself* per say, but the "Mother Board" as the bots and herself were known to call her. The Mother Board has managed to hack into Glitch's thoughts and talks to her. Er, rather, is essentially bullying and berating her until Glitch Hop returns to the creators. Managing to duplicate any voice she (Glitch) may hear, the Mother Board is practically driving her insane until Glitch Hops decides to come back.