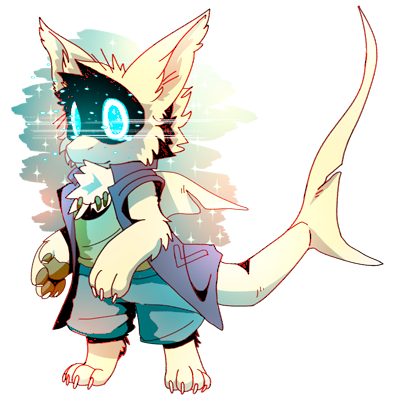 All comments by Thresh are in-character.

Don't wait around for me to worship at your temple or something, Bright Eyes, but we're cool.
Wires and psychokinetics are all I know, which is why you turned out so Pretty.
They say not to judge a book by it's cover, but your crimes are written all over your face, Ninetails.

Once upon a time, there was a little boy born to two scientists who could swim through code like he was born in a binary ocean, and manipulate objects with his mind. His parents, while lovers of science, had a deep fear of the supernatural. They were so scared of his abilities that whenever they caught him bending spoons or manipulating metal with his mind, they would slap him hard and fast on the behind and tell him that he should never show anyone what he could do, because people would only grow terrified of him.

This did not dissuade him from the practice, but only made the boy better at hiding his talent. He used his power to make great things, and his parents were none the wiser to the source of his craftiness, although they praised him for all the trinkets and baubles he made. His mind grew strong enough that he could lift things with it that his arms could not. He grew so powerful that he could look at something and know instantly what it was made of down to its molecular level.

His parents were sad too. So sad that they couldn't bear to look at him anymore, and the boy was orphaned. He lost a great chunk of his power, his face, and his family all at once. A wickerbeast who seemed like he couldn't see his ruined face, even with an excess of eyes, took him in and kept him safe when no one else would have him.

His brief jaunt across several dimensions taught Thresh new skills, although no one knows much about what those are. The only thing known for sure is that his big, naked eyes seem to look so far into you that they see past your mere existence, into everything you are and aren't. He seems to know everything, and have information on everyone.

Thresh is a master of technology and intel, and a superb hacker. To those with the know-how, it's no secret that he's the brain behind the underground rebellion against the "false king."

He has a little trouble maintaining his physical form due to overuse of his psychokinetic ability causing him to lose control over his corporeal body. Because of this, he invented a robot to do all of the heavy lifting. Having a terrible sense of humor, he made the robot only speak in sarcastic remarks.

Personally, it's difficult to get close to Thresh. While he has no trouble staring straight into the souls of others, he keeps his own secrets well guarded. Whatever feelings he's got left after his childhood trauma are covered up with a prankster personality. He gives nicknames to everyone and dances around questions about himself.