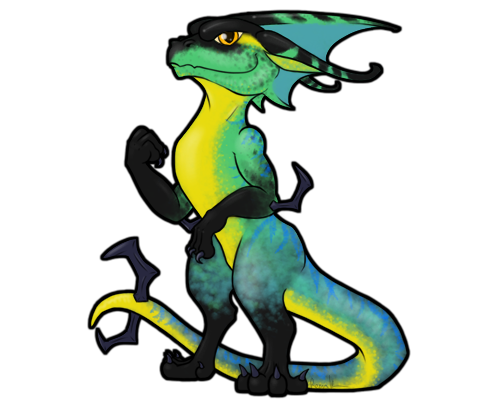 This is 'Kylessa.' She is a species known as a sier'rahd. She's from a warm, tropical region, thus her bright and vibrant colors ( should've made a tundra sier'rahd and not a tropic one, but I'm a dummy and like this color scheme -.-; ).

She has a decent-sized clan, having 7 daughters and 4 unrelated males under her command. Kylessa is the Matriarch and has some issues with her eldest daughter that's trying to overthrow her.

(a possible detailed ref and link will be here in the future...)

--
Might as well add the "quick species lore" here while I'm working on the revamped species ref:
Sier'rahd are a subspecies of a now-eradicated species called the Solaric Vimora. They used to serve the Solarics until the Solarics were wiped out. Without their masters, the sier'rahd became feral.

Sier'rahd function in a matriarchal society. Females are slightly bigger and stronger than males. Females are easily identified by their headcrests and their crests determine their standing/rank in a clan. Males can be identified by having one or two horns upon their heads, no crests. Other than that, both genders look pretty much the same in build and structure.

The Matriarch will have a large headcrest and she is often and biggest and baddest of the rest. In some species, her head crest could be flushed with bright colors/patterns when facing off rivaling Matriarchs to scare them out of her territory. Otherwise, the size of her crest will determine if she's stronger than her rival. If both Matriarchs seem equally matched or neither are willing to back down, they will often fight to the death. The losing Matriarch's clan will either be assimilated or destroyed, depending on how plentiful the prey are in a territory.

Sier'rahd typically hunt in clans mostly made up of the Matriarch's daughters. Males will leave or be kicked out of the clan they were born in to join another clan in a different territory. 3 to 5 males are usually kept in a clan. This tactic greatly reduces the chances of inbred diseases that could occur.

A clan can range from 5 to 20+ individuals, all depending on the amount of prey and how well the prey are doing in a territory. If the prey numbers drastically fall, a large well-off clan will either split and go separate ways, or in worse case scenarios, sier'rahd resort to cannibalizing on each other.

Other info: Sier'rahd are warm-blooded, despite looking reptilian. They have an incredible ability to mimic speech and sounds, near to perfection in tone and pitch. They're highly cunning creatures and are almost impossible to domesticate. A sier'rahd can die from loneliness.

*Sier’rahd are always on four legs, but since I wanted to keep in the style of FV, I made mine anthro-ish.