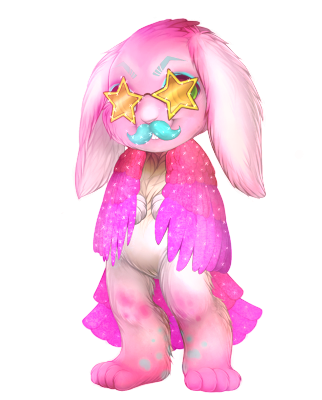 MANTINI no longer has a house! They will be unable to work. Please replace the house or move MANTINI into a FC slot.

What do you mean, he's not a raptor? He wears a HOT PINK HUSKY RAPTOR CLOAK! Only REAL RAPTORS wear those! He made it himself, by STABBING A PIECE OF FABRIC OVER NINE THOUSAND TIMES! And his MANSTACHE even SPARKLES!

A living testaMENt to the merits of MANTELLIGENCE, there are very few MANLY words that MANTINI does not know, and fewer MANLY puns he has not already made. MANTINI has, in fact, written and trademarked several TESTOSTERONE-FUELED PHRASES, which are to be used only with his express approval. To use one of these phrases with his permission is to achieved one of the highest BRONOURS possible within the MAN-CLAN, and the rights regularly sell on auctions for several thousand HEAVY GOLD PIECES.

MANTINI is TOO MANDSOME to live in THE BIG MANLY BIRD MANSION (WHICH USED TO BE FOR BIRDS, BUT IS NOW FOR ONLY MANLY MANGENTA MEN). He has his own house in front of the MANSION, where he keeps a look out for any unwanted visitors, so that he can get the first word in before someone else gets the first punch in. Not that he needs to worry much; MANTINI's verbal assaults are the stuff of legend. Visitors sometimes find themselves being lectured by this small rabbit IN ALL CAPS, whilst hulking raptors, dragons, and other large creatures watch from a distance, slack-jawed.

Sometimes, the very MANLIEST of MEN are MANVITED to MANTINI's place, for a... SECRET SONLY SLEEPOVER. No-one knows exactly what happens during these exclusive 'Triple S' events, as all involved are sworn to silence, but... it must be something very macho. It is speculated that one of the paintie admins may be involved, but this may never be bronfirmed. literally two minutes to get him approved, I'm howling

MANTINI is also on excellent terms with the BROKAGE, FLEX BICEPS, who is always invited to his SECRET SONLY SLEEPOVERS. Rumour has it that FLEX BICEPS has even ordered his own AWESOME MANIQUE BROKAGE COSTUME from MANTINI, but no-one's sure yet.

NO-ONE HAS CALLED HIM A 'BUNNY' AND LIVED