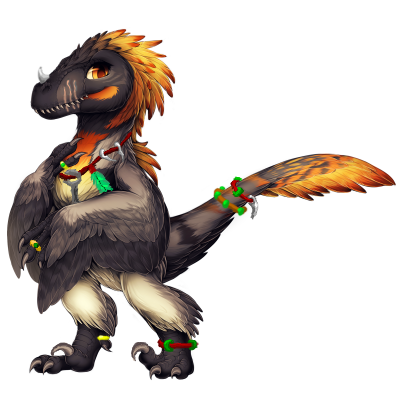 This quiet saurian rarely speaks, but has a soft voice. Frostwing prefers the company of wild beasts to normal folk, seeking refuge in the wild places. While he prefers male pronouns, he is defined as genderless. He has been known to hoard paper and ink, though no one has seen what Frostwing does with them. He is very protective of the key around his neck, which, when placed under a certain type of light, has the visible inscription "Our Last". It is unknown what this means.

He and his friends have recently found what seemed to be an old, abandoned manor house and have take up residence. ...Only to discover it not being quite so abandoned. So far, no one believes Frostwing that a ghost is haunting their new home. Being a Spirit-Speaker, Frostwing often is haunted by ghosts, poltergeists, and other passing spirits, however most tend not to believe him when he speaks of his gifts, or otherworldly visitors.

Months after moving from a high-rent shack in the middle of town to a rent-free mansion just outside the village, Frostwing has noticed a large influx of newcomers, ready to begin making a living in Dragonsmaw Manor. He has decided he would rather befriend the resident ghost than brave a new, ever expanding crowd, despite peer pressure from his friends,

After coming into contact with a magic artifact (he's too intent on preserving his remaining dignity to say it was a stuffed plush doll), his plumage has changed into that of an Emperor Penguin. Frostwing seems pleased by this change.

Frostwing is not overly fond of Swiftclaw, as she makes multiple attempts to garner his attention per day. As the oldest in the group, he insists that Greyfeather and Fivel allow Swiftclaw, Ollie, and the weird black slime to stay. None of the former know why he favors the latter. Indigo and Frostwing both agree to keep the slime, named "Nightshadow" by Indigo, as a pet.

With the additions of, Marshmallow, Snowfeather, Direfin, Mako, and Queen Rhi-kiss, Frostwing has become ever more secluded. Recently he has been briefly seen guarding an old, worn chest hidden among his menagerie. If one were to investigate, they would find the chest full of strange writings and faded pictures over a hundred years old, seemingly depicting a younger Frostwing, alongside several long gone individuals.

Increased monster and Undead sightings have made Frostwing's life difficult, and so far his attempts to soothe a slain rabbit have resulted in an Undead disaster. With a demonic bat roosting too close to Frostwing's tower for comfort, the secluded Saurian may finally have met his match.

"How do I start? I was found as an egg, lost and abandoned. Sanctus, my brother, your family took me in. You were born later that year, but still I stayed. Do you remember our friends? Do you remember how we led them astray? Do you remember how you died? I'm still here. Hundreds of years of waiting, and now some of you are coming back. How many will come back? Will you all end up haunting me?"

Sanctus only watched, for the first time in both his life and unlife, speechless.

My first villager. I may get him a proper paintie when I can afford it. Lowest digit I have, with a palindrome ID that has a neat mathematical pattern. Torn between leaving him a Velociraptor-type Saurian (the current base), or making him a Yi qi Saurian paintie. Was given a Magic Penguin Velociraptor Plushie during the Snow Festival, having previously been an Arctic Velociraptor. He is my primary villager for Roleplaying, followed by Swiftclaw, or is some cases replaced by her if the setting/plot calls for a more aggressive character.

Update: Now has his own paintie.
Update 2: New paintie version, unfortunately unfinished due to technical issue. If I'm ever able to finish it (and fix the problem preventing it) another version is a possibility.