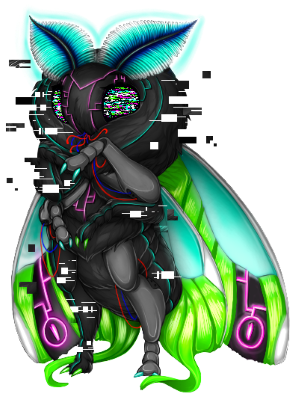 This friendly bug was created in a lab by some unfriendly folks, but they didn't find any use for him. Being too loud, too bright, and borderline dysfunctional, PI was sent away without any thought! They wandered around aimlessly for quite a while until he found some wires that attracted his attention.

Eventually, all of his wire-eating alerted the villagers of Dragon's Maw Manor that something was up. The village managed to track PI down, but after clarifying that PI's acts were not intended as sabatoge, PI was more or less forgiven.

They now have their own place in a junkyard, where they spend their time searching for old electronics that might have some intriguing parts!