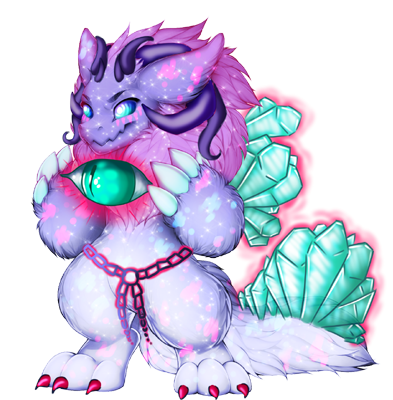 Nicknames: Jor, Vick, Yor, York.
Personality: Insightful, knowledgeable, slightly crazy, resourceful.
Gender: Male.
Accent: Almost robotic, but with an exotic lilt..
Quirks: Flicks his head often and twitches.
Species: Cave Demon halfbreed.
Age: Unknown.
Orientation: Hasn't decided yet, most likely Pan though.
Significant Others: Jas. He has made friends within the village, but no one of "significance."
Enemies: No one at the moment.
Possessions: Tsabrychw and his chains; a present from his father, meant to help control his power.
Skills: The eye of Tsabrychw. It holds a lot of powerful magic. York mostly uses it for seeing glimpses of the future and past, scrying on people and as a weapon with a beam of pure energy.
Career: Seer.
Weaknesses: His "eye."
Likes: Scrying, experimenting with magic, sleeping.
Dislikes: Staring, stealing, religon and invasion of personal space...also frogs...don't ask!

History: Jorvik was once fairly normal...as far as Cave Demon/Wickerbeast halfbreeds go... However he fell in with a rather dark crowd one day, whilst trying to impress a female. Marked by these animals he soon rose amongst the ranks and learnt of their ultimate goal. The theft of the eye of Tsabrychw, thus rendering them the most powerful clan for miles around. Jor volunteered to head the mission. His father tried reasoning with the youngster, but Jorvik struck him down, now corrupted too much to realise what he was doing. The night the eye was stolen, Jorvik was the first to reach for it, and thus the eye became soul-bonded to him. Tsabrychw gave York a glimpse into his future, for if he continued on this path of destruction he would lose all those he held dear. Jorvik raced to his father's lair and begged for forgiveness and for him to help him. Jorvik was sent to Temmie, where she and the village helped him learn to control his magic and his power. Jorvik decided to stay with the village after, as it was the only place that felt like home to him anymore.