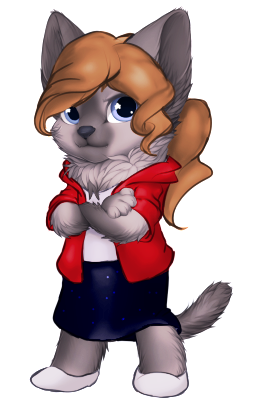 Layla is a very peppy cat, with a lot of drive! At least, for the things she cares about—legends, hauntings, the fae folk, that sort of stuff. Which all fits right into what she does for a job, what with being a ghost hunting team!

This occupation eats up a lot of her time, as she’s either lazing about, tinkering with her gear, or actively researching some topic tied to their next site—or anything she intends to do in the near future. Knowledge is one of the most powerful tools to have in any situation, and she’s always going to be well-armed. Unable to stand going into anything blind, and powered by her ambition to rise to the top, she makes a point of being capable of leading her group on each hunt. Ready to answer any question, ready to parry any doubters, ready to take charge of whatever challenges are thrown her way while on the job. Which has proved to be well-worth it; not all of their sites are safe, haunted or no, and some of the discoveries they’ve made have necessitated the assistance of other resources. She was always able to organize that; nevermind that they’ve come across an asylum of exotic, and some toxic animals, she had been anticipating this and had the appropriate material to lead her crew to safety. Nevermind that a crewmate’s gear malfunctioned, or sparked out; she was there, armed with experience of her own tinkering and a quick mind.

Her partner, Daiki, also accompanies her on the ghost hunting trips. They make a fine pair, though Daiki’s fascination is aimed more towards the flora that grow around the sites. Layla finds no fault though; it just adds another resourceful mind to the hunt!