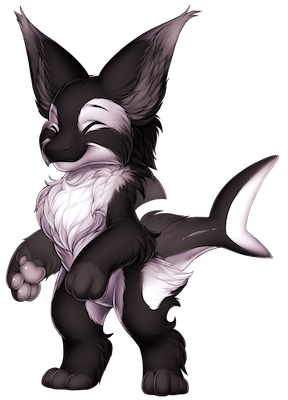 Ocean is the current leader of the group. She loves seeing what different potions can do which is the main reason she is an alchemist. She often spends her time in her office where she works on her potions. She can be shy to those that are not in her group and has to work up a lot of courage to even say hi to newcomers. She has also been rumored to see ghosts.

-------
Ocean stood next to her sibling's bed as they screamed. They twitched, yowled, and screamed, sometimes clawing at the air with one paw. The other was held tightly, like they were gripping something. Foam flecked the corners of their mouth. After a few moments of agony, they went limp. Ocean lowered her head in grief, closing her eyes. When she opened them, she noticed the hand that her sibling had been holding so tightly was opened. They had been clutching a little blue gem. Ocean picked it up and held it tightly, like her sibling had done. She looked at their body and gasped. There were two of them. They was floating above their body and... slightly see through? It took Ocean a moment to gather her thoughts. She was looking at her sibling's ghost. She could see ghosts... if not just her sibling... did it have anything to do with the gem? She never saw spirits before now.
After awhile, Ocean had gathered from Alti's ghost who had begun to speak that the gem did in fact let the being that it was touching see ghosts and help guide them to the underworld. She put the gem into a gold necklace that she never took off. Ocean was low on her potion bottles and therefore had to go out and buy more. She wasn't prepared for what she would find. The streets of Quetzal Palace were crowded that day. This confused her because it was never this crowded. So she moved through the streets and earned some stares from some. But why would they be staring at her? She was just moving with the crowd. That's when she noticed that one of the villagers that had stared at her walked through someone. Ocean paused. Someone walked by her and Ocean ran her hand along the villager's side and found that her paw went straight through them. She froze. Almost everyone here were ghosts. This was not what she expected to find at all. Scared, she turned tail and ran home, moving as fast as she could, forgetting completely about the bottles that she needed to buy.
_____
Note: might make her a paintie when I get a paintie ticket. I imagine her with light blue fur with dark blue stripes on her back and the tips of the fins on her tail. She might have a little scar on her shoulder and her eyes will be a purple color. Her tail itself will be a light blue but darker than her fur. And of course, the pendant will show through her fur slightly