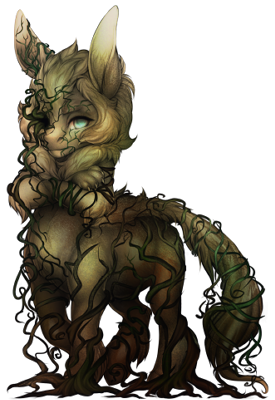 A large earthy brown Saggi fixes his gaze on you. One of his eyes is a brilliant sky-blue, the other seems to be gouged out. He is covered in thick tendrils wrapping themselves around his body. The tendrils seem to adjust themselves with his every movement. He glares at you, clearly in an untrusting way.

Thistle was originally a handsome dusty brown Saggi with sky blue eyes and constant positivity. He could brighten anyones day with his warm smile and energetic personality. He was best friends with another Saggi, who went by the name of Lilac and was a gifted herbalist. One day she offered Thistle special "magical" seeds she had bred as a gift, a warm smile on her face. He accepted without hesitation, later planting the seeds. When he turned to walk away thick tendrils grew from the ground and wrapped themselves around his hooves. They pulled him into the ground, rapidly wrapping themselves around his body. He collapsed, and was painfully encased in the tendrils for hours before the pain stopped. When he was finally able to move the tendrils seemed to readjust themselves to his will. He ran, without a second though. He never saw Lilac again, nor understood why she had done that to him.

He never trusted again, not after being turned into some sort of plant hybrid. He has a very harsh view on the world, and often lashes out. Part of his mind is also corrupted, for Lilac wasn't lying when she said the seeds were magic. Still, he has somewhat gotten over the events and is able to control the tendrils. If he warms up to you his old personality can often flash by, but he's still filled with post-traumatic stress. He needs help.