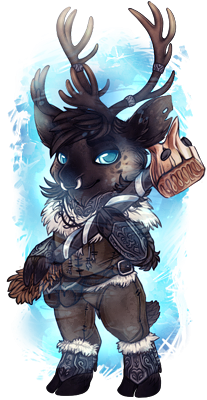 But the herd was dying. Dying to the elements, dying to the monstrous beasts whom Siku had seen Tigerseye warriors battling against to protect their beloved village. Deciding to take action, Siku went against the word of the herd's elder, and entered Tigerseye Peak.

Quickly he became a very skilled warrior, and, with his herd giving in to desperate times and moving into Tigerseye's village, he moved on to other villages to battle and defend.
~~~~~~~~~~~♥~~~~~~~~~~
Adopted from @draconic (8/1/17)
adopted as a wanderer (2/6/17)
paintie by @simplysuburban
Winner of January Paintie Contest