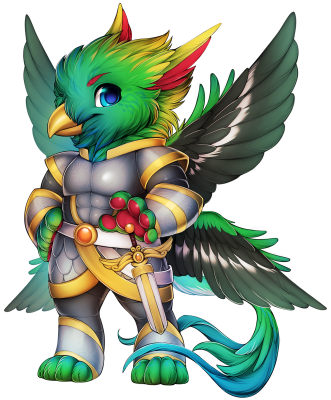 He'd never actually wear armor. It'd slow him down too much! But just for the look, he supposes it's okay....

Felix is a proud, wandering, red-winged blackbird. After his father had been murdered by a basilisk, he set off as a child to go seek retribution--as was only appropriate, being the son of the tribe's leader. Seven years later, he has yet to return--not having yet felled the verminous basilisk that he so owes an honorable battle to--but much more experienced in the world, even if he retains some of his naivety and ideologies from his tribe. Having become stout friends of Azha and Piet, or Solar, as she was known at the time, he's come to learn about the graciousness of mercy, and, that common courtesy is to talk to people upon meeting them, not challenge them to a duel. Of course, he's always still ready and raring to fight--it never hurts to get in all the practice you can, after all!

He favors using a scimitar in combat, though the way he wields it like a claymore, even after all these years, leaves some question as to whether or not he should really own the thing. He despises magic, but only in himself using it, or a stranger using it without saying they have magical abilities up front. "Dirty tricks" and "unhonorable sorcery" he often will scoff about it, although it could stem from a fear of himself--the moments he's lost control. He does have a basic control over fire--pyrokinesis if you will--but he hates to use it, fearing the snarling tendrils of violet that begin to escape and herald the coming of something... else. Something he can't control, he can't understand. But--no, he's not afraid. He's no coward, but he's... cautious. Any good warrior has a sense of caution, right? And that's all he is, he's now a little cautious. Only a bit. Can't have anyone thinking he's weak, or unsure--such things would only insult his remaining kin, and his status as her only child. Even apart from her and her tribe, he still upholds his dignity and pride of being one of them, and looks forward to the day he can return, triumphant, with the head of the slithering menace, and then be a part of a family once again. It's been so long...

Out in his travels--away from Piet and Azha as well, when fate called them away--he met up with Alexa, and while they're an unlikely and awkward pair, he would still consider her a friend. A bit prissy, but she's learning to chill out.