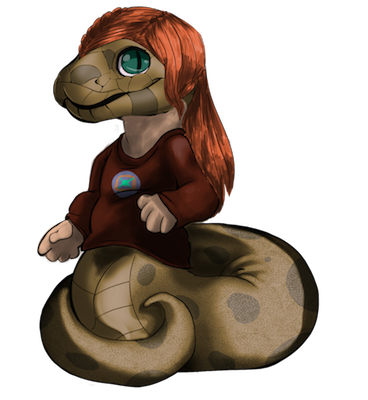 Sitnah, Isabelle's partner and second-in-command, is a cruel girl, cursed by fate(and a witch) to forever have the features of a snake. She is similar to Wampus Cat in this way, except that she does not hide her face. The only people she truly cares about're Isabelle and Quintin.

She enjoys torturing people by setting them on fire or envenomating them severely. She thinks it's funny to see their suffering. If you want to know her schedule, she publicly beats/flogs people on Mondays and Thursdays, burns people Tuesdays, Wednesdays, Fridays and Saturdays, and has church service on Sundays.

WARNING: the paragraph below contains (kind of) gore.

Sitnah is mostly snake, but she has the upper body of a human, a tribute to her former state. The sna-ke Bothrops insularis, or the Golden lancehead, is a snake that only resides on Snake Island, off the c-oast of Brazil. B. insularis has reportedly never struck a human, but lanceheads kill more humans than any other snake in North and South America. The venom of the lancehead causes swelling, local pai-n, bruising, blood blisters, brain hemorrhages, blood in vomit/urine, nausea, kidney failure, and sever-e necrosis.