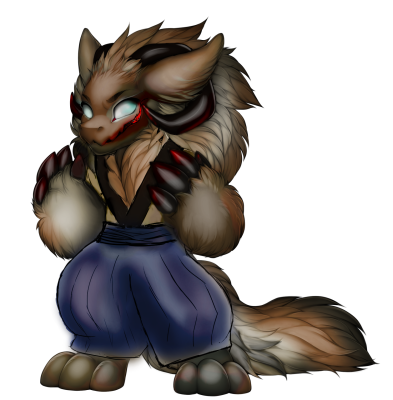 Matsura Kagemune is infected with Lycanthropy. Changes into a beastly monster after exposure to moonlight or especially frustrating board games. Howling at the moon relieves the symptoms for a little while, but use a Golden Apple for best results.

"My sister did this to me, and I hate her. Give me some candy or coins, and nobody gets hurt."

The helpful and unfortunate brother of a Kuchisake-Onna. Kagemune is a loner by isolation, not choice, and yearns to be accepted despite his appearance.

A loyal and fierce samurai, Kagemune dedicates his life and strength to keeping the borders of Dragonsmaw safe for explorers and visitors. Highly skilled in blades and honor, Kagemune rarely loses.

Kagemune spends his free time reading or writing poetry or walking alone through orchards, gardens or parks. He also likes bonsai and gardening. His favourite treats are green tea, sake and flavoured rice.