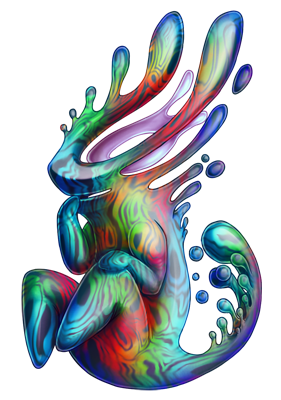 Splatterkanin are small, genderless, amorphous creatures found primarily in the depths of outer space. They have a central core in a flattened torus (ring) shape which acts as a control system for the rest of the body - Splatterkanin can share memories and experiences through the linking of these cores. Older splatterkanin have much larger cores and have been known to absorb smaller individuals during this process.

Their shape is retained and movement is made possible through rapidly building up and breaking down an internal filament matrix, similar to a cell cytoskeleton. This means that their structure, albeit resistant to deformation, is incredibly loose, with their movement being slow and free-form. They gain the energy to do so by absorbing light and heat from nearby suns.

Movement through deep space is difficult, so most Splatterkanin prefer to hang around asteroid belts and planetary rings where they can propel themselves between individual particles. Splatterkanin that find themselves adrift in space can maneuver themselves by ejecting mass in the opposite direction of desired travel.

Although much more at home drifting about the void of space, Splatterkanin may accidentally stray too far into the gravitational field of nearby planets and plummet to the world below, often creating a spectacular light show for the inhabitants, if there happens to be any. Splatterkanin that survive the trip have to adjust to the increased gravity, often opting to create weak, rudimentary skeletons from the filaments that help retain their shape. On account of this, they find aquatic environments to be much more liveable than terrestrial.

Due to their method of energy acquisition, space-bound splatterkanin are a jet black colour to absorb as much light as they can, turning a pale white when they have absorbed a sufficient amount. Terrestrial splatterkanin show a much wider range of colours and patterns as the camouflage or warning signals they can display offer an advantage to their survival. Sapient species may attempt to cultivate Splatterkanin into taking on certain colours and appearances, although often they become attached to particular objects, shapes or styles and refuse to change from this favoured state.

It is speculated that splatterkanin that do not survive the fall still leave their mark, however, as their rudimentary DNA has been found on many planets and in many species, even on Earth. A widely accepted hypothesis states that splatterkanin falls are often the starting point for life on habitable planets. If you're interested in a splatterkanin of your own, check out the premade workshop here!