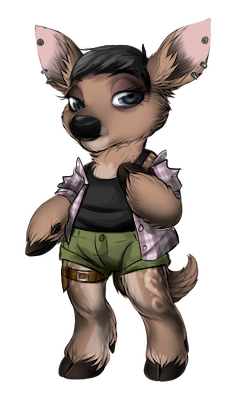 It is very well known to confuse the practices of alchemy and magic. One is based on scientific algorithms while the other requires supernatural intent. Margaret is no chemist, and could not memorize even an algebraic formula to save her life. As the mayor states her line as an alchemist, Maggs insists matter-of-factly that she is a witch. But whatever.

She lives on her own and prefers it that way. Her antisocial tendencies often lead to awkward silences, those that give her anxieties and thus would make it impossible to live with. There is default friendliness in her front, and underneath is the light of kindness should anyone get to know her. The little town provides a number of acquaintances, but none she feels she could trust to understand her well enough.

Martin
Albeit it took a while before she warmed up to Martin. Though he put up a friendly front, Maggs needed further confirmation in his interest to be friends with him. She cannot understand why he insists to be friends with her -- they're very different in nature! -- but Martin seems to be very determined to be a part of her life. And he is. Maggs has revealed to him that she is a witch and is surprised to find he is interested in joining her in rituals. His participation still makes her hesitant as if waiting for him to reveal harsh judgement...but the man is patient and respectful. She's yet to reveal to herself how happy he truly makes her.