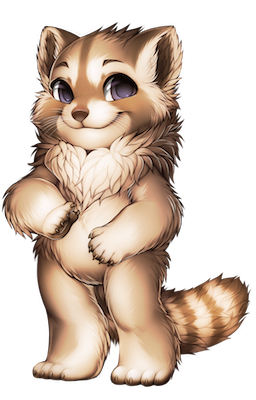 Cinnamon no longer has a house! They will be unable to work. Please replace the house or move Cinnamon into a FC slot.

Name: Cinnamon
Age: 20
Gender: Male
Personality: Cinnamon is usually an excited raccoon, and loves to talk to people, but can get nervous quite quickly. He has the quite unfortunate tendency to steal things while he's walking around. He stuffs them into his tail, and while at home, he shakes his tail slightly and piles of treasure fall out everywhere. He feels extremely guilty but also embarrassed after this, so he just decides to hide and keep it stashed in his basement, where he has thousands of furcash worth of stuff, but he cannot use it at all because of his "Code of honour".

Bio: As a child, Cinnamon had a simple childhood. Running around with his sister, Pepper, fighting each other with toy swords, pretending to be knights, screaming and drawing. As he grew up, his older sister started to get into crafting small things out of metal, and Cinnamon decided to join too, but he liked wood and brick more. As teenagers, the two opened a stall in Oceandome, their dream home, and became quite successful. Both Raccoons grew quite skillful, and decided to turn it into a full time Career. They still work together to this day, and quite enjoy working. He decided he wanted to branch off to being a travelling merchant, however his sister decided to stay at home. They still keep in touch to this day, however.