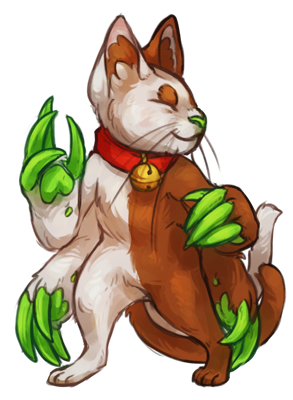 "I can't see very well, but I can see I want to be friends with you!"

Jiji, or more commonly known as 'The Master', is the reason the Lucky Cat species exists. Jiji has a chimera gene, which means that he has an unusual divide between two colours!

He breathed life into non-sentient cat statues, which began to move and become alive. They are his creations, and he loves them dearly.

Since he is the original, it is often contemplated on how he was made; or if he is an entirely different species.

One thing is for sure though, he gives the best hugs, or if you prefer, high fives that are 4x better than usual!

Be careful though, he's blind, so make sure he knows your there!

He tends to have a gaiacat near him at all times; it was obtained whilst talking to a friend.